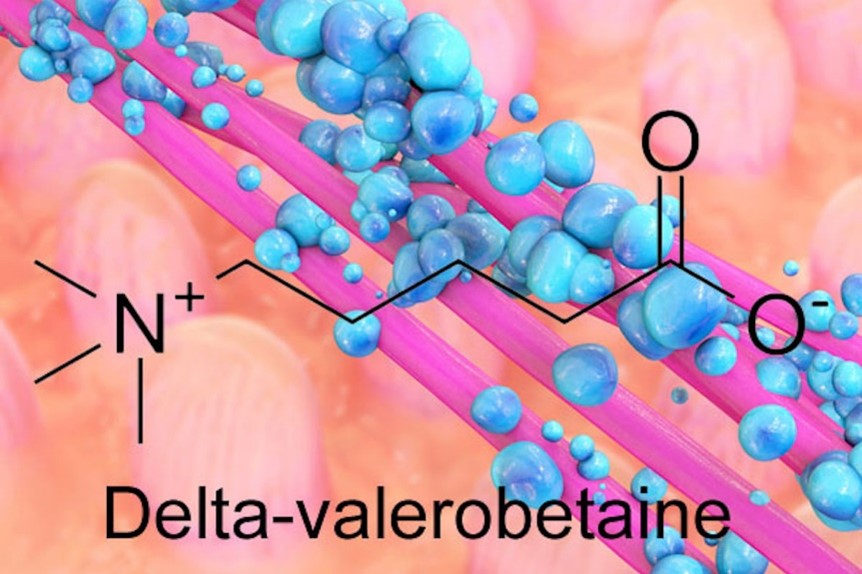 The bacteria inside our guts are fine-tuning our metabolism, depending on our diet, and new research suggests how they accomplish it. Emory researchers have identified an obesity-promoting chemical produced by intestinal bacteria. The chemical, called delta-valerobetaine, suppresses the liver’s capacity to oxidize fatty acids.

The findings were recently published in Nature Metabolism.

“The discovery of delta-valerobetaine gives a potential angle on how to manipulate our gut bacteria or our diets for health benefits,” says co-senior author Andrew Neish, MD, professor of pathology and laboratory medicine at Emory University School of Medicine.

“We now have a molecular mechanism that provides a starting point to understand our microbiome as a link between our diet and our body composition,” says Dean Jones, PhD, professor of medicine at Emory University School of Medicine and co-senior author of the paper.

In addition, the authors showed that people who are obese or have liver disease tend to have higher levels of delta-valerobetaine in their blood. People with BMI > 30 had levels that were about 40 percent higher. Delta-valerobetaine decreases the liver’s ability to burn fat during fasting periods. Over time, the enhanced fat accumulation may contribute to obesity.

Specific varieties of bacteria may produce more delta-valerobetaine than others, and it is possible that an individual whose microbiome contains more of these bacteria will experience more pressure on their metabolism through suppression of mitochondrial function., Neish says.

“There are a number of implications that we are following up on,” he says.

Another question is: what factors in human diet – meal timing or composition — drive higher production of valerobetaine? In mice, delta-valerobetaine promotes obesity and fat accumulation in the liver when the mice are fed a high fat and high sugar diet typical for people in Western countries, but not a standard mouse diet.

Our bodies’ sensitivity to delta-valerobetaine may have evolved as a mechanism for promoting fat storage under conditions when it is advantageous – when food was scarce and access to it was irregular, says Ken Liu, a former Molecular and Systems Pharmacology graduate student who is the first author of the paper. (Liu has now earned his doctorate.)

When Liu first identified delta-valerobetaine, it was a relatively obscure molecule. Since then, several papers have appeared on its metabolic significance.

“We had to figure out its structure and how to synthesize it, because we couldn’t simply buy it from a supplier,” he says. “And we had no idea what it did. We thought: it looks like carnitine, so it might interact with the carnitine shuttle pathway.”

Carnitine, sometimes taken as a dietary supplement, acts as a shuttle, transferring fatty acids into mitochondria for use as fuel – and delta-valerobetaine slows the shuttle down. An implication of the team’s research is that intestinal bacteria may influence whether someone trying to lose weight would benefit from carnitine supplementation.

“This type of information could potentially help someone develop a personalized strategy for weight loss,” Liu says. “But there are a lot of things we need to understand better about how delta-valerobetaine functions in context.”

Germ-free mice were housed in the Emory Gnotobiotic Animal Core, and their metabolites were analyzed in the Emory Integrated Metabolomics/Lipidomics Core. Researchers tested clinical samples obtained from the Emory-Georgia Tech Predictive Health Institute and Center for Health Discovery and Well Being, as well as samples from a fecal microbiome transplant study.