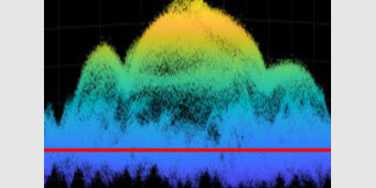 Physicists at Case Western Reserve University and Tufts University say they’ve changed the shape of a flat liquid crystal surface without applying any local stimulus—essentially remotely altering its physical appearance without touching it.

That’s something that scientists have never done before, the researchers said. In doing so, they defied the gravitational force that ordinarily would cause a level plane to occur where liquid and surrounding air meet.

“This is a ground-breaking accomplishment and could prove to be the starting point for future applications—many which we cannot yet imagine,” said Charles Rosenblatt, Ohio Eminent Scholar and professor of physics at Case Western Reserve, who is one of project’s lead researchers. “Right now, this work is foundational, but it will be built upon by our team and others and new applications could someday become reality.”

Previously, scientists who have similarly transformed the shape of liquid crystal surfaces have done so by using heat, light or some other kind of force applied directly to that otherwise undisturbed surface.

But this team took a new route, managing to change the liquid crystal surface simply by placing a “bumpy” or patterned substrate on the opposite side of a thin film in which the molecules are aligned in parallel. The result: an identically bumpy shape where there “should” be a flat, undisturbed surface.

The research team’s work was funded by the National Science Foundation and were recently published in the journal Physical Review Letters and highlighted by the journal’s editors for special attention.

Future applications could lead to improvements in microchips and even the development of fluid microscopic tools that could perform repairs less invasively, flowing back into their original shape after use.

“Think of what water does when you put your hand into a bucket and take it back out: It returns to its original shape,” said Andrew Ferris, a 2020 Case Western Reserve PhD in physics whose dissertation included this work and is now a staff physicist at Sandia National Laboratory in Albuquerque, New Mexico. “We could someday build tools that could do that.”

The scientists at Case Western Reserve and Tufts aren’t the only ones pursuing malleable liquid crystal materials with multiple applications.

Scientists elsewhere are “already doing amazing things with liquid crystals,” but always in response to a localized stimulus like heat or light, said Timothy Atherton, associate professor of physics at Tufts University and a former postdoctoral scholar and former visiting assistant professor at Case Western Reserve.

Atherton said this new work suggests an even more exotic application, one he acknowledged might even sound a bit far-fetched.

How they did it

The scientists essentially manipulated what Rosenblatt called “an orientable Newtonian liquid,” referring in this case to a nematic liquid crystal that behaves predictably, i.e., linearly, when an outside stimulus is applied. The nematic is a phase that consists of cigar-shaped molecules arranged parallel to each other, but which can flow like water.

To understand the significance, consider that when a glass is filled with water, the surface where the air and water meet is essentially flat. But in this case, the researchers forced the liquid crystal/air interface to change shape merely by exploiting the orientability of the molecules that comprise the liquid crystal.

To do that, the team placed the patterned substrate on the opposite side of a thin (a few hundred nanometers) nematic film. By doing so, they were able to control the alignment of molecules throughout the material.

The result: the appearance of a predetermined “bumpy” surface where the liquid and air meet—accomplished without any stimulus at the surface and without any control beyond the patterned “bottom” of the pool far from the surface. That relative change was huge, as much as a 30-70% increase in height from a flat surface.

Rosenblatt said the team will next work on fine-tuning the surface shape by applying an external electric field and varying temperature.

Team members also intend to study another liquid crystal phase called the “smectic phase,” in which the molecules not only are oriented, but also form layers—like books on a bookshelf. Preliminary work suggests an even larger effect than the nematic phase, with much finer features, he said.