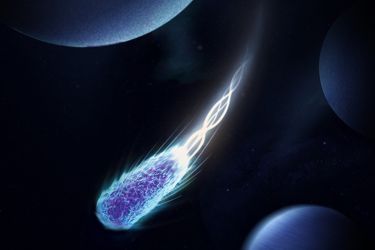 For years, science fiction authors have written about the idea of using microswimmers that could perform surgeries or deliver medicines to humans. Now, a team led by University of Minnesota Twin Cities researchers discovered how bacteria swim through different complex fluids and environments, such as the human body.

Their findings could help scientists develop new treatments for bacteria-causing diseases and design bacteria-based systems for delivering drugs into the human body.

The study is published in Nature, the world’s leading peer-reviewed, multidisciplinary science journal.

The University of Minnesota has a long history with swimming in fluids other than water. In 2004 Ed Cussler, then a professor in the Department of Chemical Engineering and Materials Science, compared how fast a competitive university athlete swam in water versus a thick, syrupy guar gum solution. It led to an unexpected discovery (and an IgNobel prize) that humans can swim just as fast in guar gum solutions as in water.

Almost two decades later, a multidisciplinary team at the University of Minnesota has revisited the problem, except the swimmers are now microscopic bacteria instead of university athletes. They found that bacteria swim even faster in thick solutions than in water.

“Bacterial swimming,” as it’s commonly known in the research community, has been studied intensively by scientists since the 1960s. Previous studies have found that bacteria swim faster in thick polymer solutions, namely fluids containing polymers, which are substances made up of long chain-like molecules. Researchers have theorized that this is because the bacteria can swim through the network formed by the chain molecules and can stretch the chains to assist their propulsion.

The U of M researchers have a possible answer. They believe that as the bacteria swim, the drag created from passing by particles allows their flagella—or the “tails” bacteria have that spin in order to propel them forward—to better align with their bodies, ultimately helping them move faster.

“People have been fascinated by the swimming of bacteria ever since the invention of microscopes in the 17th century, but until now, the understanding was mostly limited to simple liquids like water,” explained Shashank Kamdar, lead author on the paper and a University of Minnesota chemical engineering graduate student. “But it is still an open question as to how bacteria are moving in real-life situations, like through soil and fluids in their own habitats.”

Understanding how bacteria move through complex, viscous environments—the human body being one—can help scientists design treatments for diseases and even use bacteria as vessels for delivering medicines to humans.

“There are several mechanisms people have used to explain this phenomenon throughout the decades, but with this study, we provide a unified understanding of what happens when bacteria swim through complex solutions,” said Xiang Cheng, senior author on the paper and an associate professor in the University of Minnesota Department of Chemical Engineering and Materials Science. “And it’s important to understand how bacteria move in a complex environment. For example, a certain type of bacteria causes stomach ulcers. Stomach lining is a viscous environment, so studying how the bacteria move in these environments is important to understanding how the disease spreads.”

“In the end, we should all learn from bacteria,” Cheng added. “They keep moving forward despite opposition.”

The research was supported by the National Science Foundation (NSF) and the University of Minnesota Industrial Partnership for Research in Interfacial and Materials Engineering (IPRIME).