It’s hard to imagine life on Earth without mammals. They swim in the depths of the ocean, hop across deserts in Australia and travel to the moon. 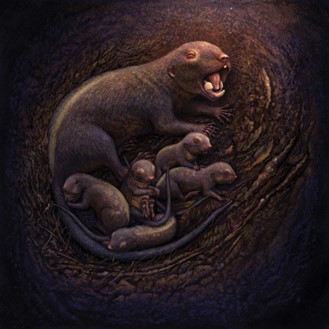 An artistic rendering of multituberculates from the genus Mesodma—a mother with her litter of offspring—who lived in western North America 60 to 70 million years. Fossil evidence indicates that these creatures were the most abundant mammals in western North American just before and directly after the mass extinction event 66 million years ago that killed off the dinosaurs. Image credit:  Andrey Atuchin

This diversity can be deceiving, at least when it comes to how mammals create the next generation. Based on how they reproduce, nearly all mammals alive today fall into one of two categories: placental mammals and marsupials. Placentals, including humans, whales and rodents, have long gestation periods. They give birth to well-developed young—with all major organs and structures in place—and have relatively short lactation periods during which young are nursed on milk from their mothers.

Marsupials, like kangaroos and opossums, are the opposite: They have short gestation periods—giving birth to young that are little more than fetuses—and long lactation periods during which offspring spend weeks or months nursing and growing within the mother’s pouch, or marsupium.

For decades, biologists saw the marsupial way of reproduction as the more “primitive” state and assumed that placentals had evolved their more “advanced” method after these two groups diverged from one another. But new research is testing that view.

In a study published online July 18 in The American Naturalist, a team led by researchers at the University of Washington and its Burke Museum of Natural History and Culture present evidence that another group of mammals—the extinct multituberculates—likely reproduced in a placental-like manner. Since multituberculates split off from the rest of the mammalian lineage before placentals and marsupials evolved, these findings question the view that marsupials were “less advanced” than their placental cousins.

“This study challenges the prevalent idea that the placental reproductive strategy is ‘advanced’ relative to a more ‘primitive’ marsupial strategy,” said lead author Lucas Weaver, a postdoctoral researcher at the University of Michigan who conducted this study as a University of Washington doctoral student.

Weaver reasoned that the microscopic structure of fossilized bone tissues can house useful life-history information about multituberculates, such as their growth rate.

Working under co-author Gregory Wilson Mantilla, a University of Washington professor of biology and curator of vertebrate paleontology at the Burke Museum, Weaver and his colleagues obtained cross sections of 18 fossilized femurs—the thigh bone—from multituberculates that lived approximately 66 million years ago in Montana.

All 18 samples showed the same structural organization: a layer of disorganized bone “sandwiched” between an inner and outer layer of organized bone. Disorganized bone, or woven bone, indicates rapid growth and is so named because, under a microscope, the layers of bone tissue are laid out in a crisscrossed fashion. In organized bone, which reflects slower growth, layers are parallel to one another.

The researchers then examined femoral cross sections taken from 35 small-bodied mammalian species that are living today—28 placentals and seven marsupials, all from Burke Museum collections.

Nearly all of the placental femurs showed the same “sandwich” organization as the multituberculates. But all of the marsupial femurs consisted almost entirely of organized bone, with only a sliver of disorganized bone. The team believes that this stark difference likely reflects their divergent life histories.

The outermost layer of organized bone was laid down after birth as the femur’s diameter increased. For tiny marsupial newborns, bones must grow much more to reach adult size, so they deposit a greater amount of outer organized bone compared to placentals, according to Weaver.

“This is compelling evidence that multituberculates had a long gestation and a short lactation period similar to placental mammals, but very different from marsupials,” he said.

Based on this correlation, the researchers estimate that multituberculates had a lactation period of approximately 30 days—similar to today’s rodents.

Future studies of multituberculate life history may clarify which explanation is true, as well as other outstanding questions of this, and other, ancient branches of our mammalian family tree.

“The real revelation here is that we can cut open fossil bones and examine their microscopic structures to reconstruct the intimate life history details of long-extinct mammals,” Wilson Mantilla said. “That’s really incredible to me.”