Editing technology is precise and broadly applicable to all tissues and animal species. 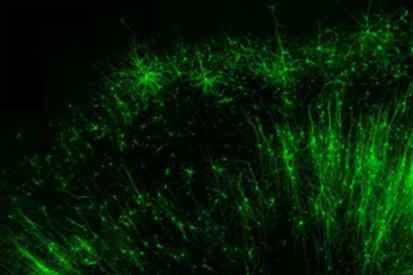 Tagging and illuminating only the inhibitory “brake” cells (green) in human brain tissue is just one of many things the new tool, CellREADR, can do. Credit – Derek Southwell, Duke University

Duke University researchers have developed an RNA-based editing tool that targets individual cells, rather than genes. It is capable of precisely targeting any type of cell and selectively adding any protein of interest.

Using an RNA-based probe, a team led by neurobiologist Z. Josh Huang, Ph.D. and postdoctoral researcher Yongjun Qian, Ph.D. demonstrated they can introduce into cells fluorescent tags to label specific types of brain tissue; a light-sensitive on/off switch to silence or activate neurons of their choosing; and even a self-destruct enzyme to precisely expunge some cells but not others. The work appears Oct. 5 in Nature.

Their selective cell monitoring and control system relies on the ADAR enzyme, which is found in every animal’s cells. While these are early days for CellREADR (Cell access through RNA sensing by Endogenous ADAR), the possible applications appear to be endless, Huang said, as is its potential to work across the animal kingdom.

Z. Josh Huang“We’re excited because this provides a simplified, scalable and generalizable technology to monitor and manipulate all cell types in any animal,” Huang said. “We could actually modify specific types of cell function to manage diseases, regardless of their initial genetic predisposition,” he said. “That’s not possible with current therapies or medicine.”

CellREADR is a customizable string of RNA made up of three main sections: a sensor, a stop sign, and a set of blueprints.

First, the research team decides what specific cell type they want to investigate, and identifies a target RNA that is uniquely produced by that cell type. The tool’s remarkable tissue specificity relies on the fact that each cell type manufactures signature RNA not seen in other cell types.

A sensor sequence is then designed as the target RNA’s complementary strand. Just as the rungs on DNA are made-up of complementary molecules that are inherently attracted to each other, RNA has the same magnetic potential to link with another piece of RNA if it has matching molecules.

After a sensor makes its way into a cell and finds its target RNA sequence, both pieces glom together to create a piece of double-stranded RNA. This new RNA mashup triggers the enzyme ADAR to inspect the new creation and then change a single nucleotide of its code.

The ADAR enzyme is a cell-defense mechanism designed to edit double-strand RNA when it occurs, and is believed to be found in all animal cells.

Knowing this, Qian designed CellREADR’s stop sign using the same specific nucleotide ADAR edits in double-stranded RNA. The stop sign, which prevents the protein blueprints from being built, is only removed once CellREADR’s sensor docks to its target RNA sequence, making it highly specific for a given cell type.

Once ADAR removes the stop sign, the blueprints can be read by cellular machinery that builds the new protein inside the target cell.

In their paper, Huang and his team put CellREADR through its paces. “I remember two  years ago when Yongjun built the first iteration of CellREADR and tested it in a mouse brain,” Huang said. “To my amazement, it worked spectacularly on his first try.”

The team’s careful planning and design paid off as they were then able to demonstrate CellREADR accurately labelled specific brain cell populations in living mice, as well as effectively added activity monitors and control switches where directed. It also worked well in rats, and in human brain tissue collected from epilepsy surgeries.

“With CellREADR, we can pick and choose populations to study and really begin to investigate the full range of cell types present in the human brain,” said co-author Derek Southwell, M.D., Ph.D., a neurosurgeon and assistant professor in the department of neurosurgery at Duke.

Southwell hopes CellREADR will improve his and others’ understanding of the wiring diagram for human brain circuits and the cells within them, and in doing so, help advance new therapies for neurological disorders, such as a promising new method to treat drug-resistant epilepsy he is piloting.

Huang and Qian are especially hopeful about CellREADR’s potential as a “programmable RNA medicine” to possibly cure diseases -- since that’s what drew them both to science in the first place. They have applied for a patent on the technology.

“When I majored in pharmacology as an undergraduate, I was very naïve,” Qian said. “I thought you could do a lot of things, like cure cancer, but actually it's very difficult. However, now I think, yes maybe we can do it.”