Development of a new reagent that works even better at detecting multiple kinds of CARs, could lead to better diagnostics and ultimately improved therapies for patients. 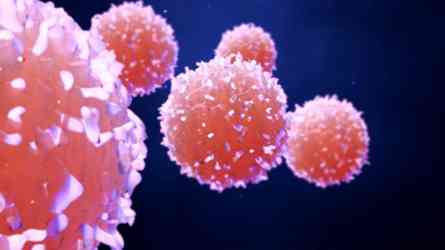 UChiago researchers have developed an imporved technique for detecting multiple kinds of CARs, which can lead to better diagnostics and therapies for cancer patients. Copyright iStockphoto.com

Over the past five years, a type of cancer treatment called CAR T-cell therapy has given some patients hope for remission. This technique adds a gene—called a chimeric antigen receptor, or CAR—to a patient’s immune cells, which helps these cells find and attack cancers.

To continue improving this immunotherapy, researchers need specific, sensitive, and precise materials that can detect CARs in blood samples. That helps them understand how well the therapy is working in a patient, and also helps them develop new CARs for improved therapies.

Researchers at University of Chicago’s Pritzker School of Molecular Engineering and the David and Etta Jonas Center for Cellular Therapy at UChicago Medicine have developed a new reagent that works even better at detecting multiple kinds of CARs. The result could lead to better diagnostics and ultimately improved therapies for patients.

The research, led by graduate student Yifei Hu in the lab of Prof. Jun Huang, was published in the journal Matter. The study resulted from a collaboration between the labs of Huang and Justin Kline, associate professor of medicine.

A new approach to detecting CARs

When patients undergo CAR T-cell therapy, the first step is that physicians take a blood sample and locate a specific kind of immune cell called the T-cell. They re-engineer the T-cells within the sample to include a CAR specific to the patient’s cancer, then return the blood to the patient’s body. Those T-cells then use the CAR to find and attack cancer. (The University of Chicago Medicine was the first site in Illinois to offer this therapy in 2017.)

While the therapy has led to long remission rates for some patients with certain types of lymphomas and leukemias, other patients do not respond to the therapy. In order to better understand that discrepancy, researchers are looking at how CAR T-cells proliferate once inside the body.

But measuring CAR T-cells can be difficult. Some of these cells have a naturally lower CAR expression, while others decrease their CAR expression over time. Meanwhile, currently the mixtures used, called reagents, can be expensive and unstable.

Hu and other members of the Huang and Kline Labs designed new reagents that used a different approach: antigen multimers, proteins that enable highly specific, sensitive, and precise CAR detection at a much lower cost. The reagent can detect multiple different CAR molecules, and it can even detect T-cells that have decreased CAR expression.

“This can be incredibly useful for diagnostics,” said Hu. “We anticipate this being used in both clinical and translational research. This reagent will allow any lab, whether they have access to the right antibody or not, to be able to detect CAR T-cells from patient samples.”

The team is further testing its reagent on patient samples, including both those who respond to existing therapy and those that don’t. The goal is to conduct single-cell sequencing and find signatures that correlate with response, which could point the way to further improvements.

“We want to find some direction to enhance CAR T-cell therapy in the future,” Hu said. “Our ultimate goal is to try to make CAR T cells work even better in patients.”