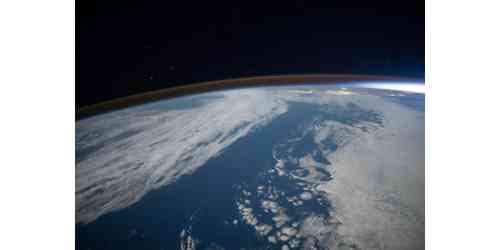 The airglow blankets the Earth’s horizon during an orbital sunset in this photograph from the International Space Station as it orbited 262 miles above the Pacific Ocean southwest of California. (Photo: NASA, JSC)

By analyzing noble gas isotope data, Rita Parai, assistant professor of earth and planetary sciences in Arts & Sciences, determined that the ancient plume mantle (the deep part) had a water concentration that was a factor of 4 to 250 times lower when compared with the water concentration of the upper mantle.

The resulting viscosity contrast could have prevented mixing within the mantle, helping to explain certain long-standing mysteries about Earth’s formation and evolution. The research is published July 14 in the Proceedings of the National Academy of Sciences (PNAS).

“A primordial viscosity contrast may explain why the giant impacts that triggered whole-mantle magma oceans did not homogenize the growing planet,” said Parai, who is a faculty fellow of the university’s McDonnell Center for the Space Sciences. “It also could explain why the plume mantle has experienced less processing by partial melting over Earth history.”

Parai’s investigation challenges an assumption that was once widely held in her field: that Earth’s mantle was uniform from the start. When the solar system settled into its current layout about 4.5 billion years ago, Earth formed when gravity pulled swirling gas and dust in to become the third planet from the sun. Volatiles like water, carbon, nitrogen and the noble gases were delivered to Earth as it formed, but Parai’s study suggests that the material that accreted earlier was a drier type of rock than what accreted later.

She found that mantle helium, neon and xenon (Xe) isotopes require that the plume mantle had low concentrations of volatiles like Xe and water at the end of that period of accretion, compared with the upper mantle. The upper mantle may have benefited from a larger contribution of mass from volatile-rich materials similar to a class of meteorites called carbonaceous chondrites.

Parai takes a multi-pronged approach to figuring out a planet’s life story. This study in PNAS presents a model that she developed, but Parai also does her own experimental work with rock samples in her high-temperature isotope geochemistry laboratory at Washington University. She studies noble gas isotopes — especially those from Xe —  in volcanic rocks to understand the evolution of Earth’s mantle composition and in terrestrial rocks at Earth’s surface to see the evolution of the atmosphere.

“In my lab,” Parai said, “we take natural rock samples — mostly modern volcanic rocks, but also some ancient rocks — and we try to understand different things about Earth history. Specifically, we want to know how Earth got its atmosphere, its oceans and other features related to habitability.”