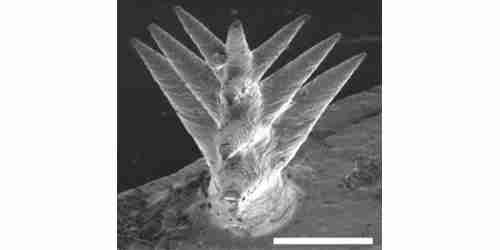 Tiny structures inspired by the shape of cactus spines allow a newly created material to gather drinkable water from the air both day and night, combining two water-harvesting technologies into one. The material, a micro-architected hydrogel membrane can produce water through both solar steam-water generation and fog collection—two independent processes that typically require two separate devices. A paper about the material was published in Nature Communications. Fog collection is exactly what it sounds like. At night, low-lying clouds along seacoasts are heavy with water droplets.  Solar-steam generation is another water-collection technique. It works especially well in coastal areas because it is also capable of water purification, though it works during the day instead of at night.  Because the two technologies operate under such different conditions, they typically require different materials and devices to make them work. Now, a material developed at Caltech could combine them into a single device, working to generate clean water 24 hours a day. "Water scarcity is a huge issue that humanity will need to overcome as the world's population continues to grow," says Julia R. Greer, one of the chief researchers of this study. "Cacti are uniquely adapted to survive dry climates," she says. "In our case, these spines, which we call 'micro-trees,' attract microscopic droplets of water that are suspended in the air, allowing them to slide down the base of the spine and coalesce with other droplets into relatively heavy drops that eventually converge into a reservoir of water that can be utilized."

The spines are built out of a hydrogel; that is, a network of hydrophilic (water-loving) polymers that naturally attract water. Due to their tiny size, they can be printed onto a wafer-thin membrane. During the day, the hydrogel membrane absorbs sunlight to heat up water trapped beneath it, which becomes steam. The steam then recondenses onto a transparent cover, where it can be collected. During the night, the transparent cover folds up and the hydrogel membrane is exposed to humid air to capture fog. As such, the material can harvest water from both steam and fog. Using computer modeling, Ilic computed the heat distribution within the micro-trees to help define the size and shape that would be most effective at drawing water from the air.