A new material developed can respond to the presence of bacterial enzymes by releasing a cargo of therapeutic nanoparticles, which could prove particularly helpful in wound dressings. 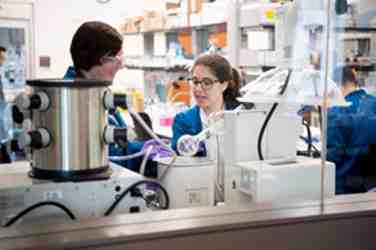 A team of Brown University researchers has developed a new responsive material that is able to release encapsulated cargo only when pathogenic bacteria are present. The material could be used to make wound dressings that respond quickly to burgeoning infections, but only deliver medication on-demand.

The development is particularly in the face of the global antibiotic resistance crisis, the researchers say, as the material could help to fight infections while also addressing the problem of resistance.

“We’ve developed a bacteria-triggered, smart drug-delivery system,” said Anita Shukla, an associate professor in Brown’s School of Engineering who led the material’s development. “Our hypothesis is that technologies like this, which reduce the amount of drug that’s required for effective treatment, can also reduce both side effects and the potential for resistance.”

The new material, described in the journal ACS Applied Materials and Interfaces, is a hydrogel — a hydrated polymer network. Hydrogels are highly biocompatible and can be used to encapsulate a range of nanoparticles or small molecule therapeutics. They are often used in wound dressings. “Smart” or responsive hydrogels are emerging as promising platforms for drug delivery. They can be made to respond to the localized environment — speeding or slowing the release of medication in response to temperature, pH or other factors.

For this new material, Shukla and her team developed a hydrogel that is sensitive to β-lactamases, a class of enzymes released by a variety of harmful bacteria. The presence of β-lactamases causes the material’s crosslinked polymer network to degrade, releasing the therapeutic nanoparticles held within.

“What’s interesting is that β-lactamases are actually a major cause of antibiotic resistance as they destroy β-lactam antibiotics, which are some of our most commonly prescribed antibiotics,” Shukla said. “But we’ve taken this bacterial defense mechanism and used it against the bacteria.”

In a series of laboratory experiments, Shukla and a team of Brown graduate students showed that the material is indeed sensitive to β-lactamases, releasing nanoparticle cargo only when β-lactamases or β-lactamase-producing bacteria were present. Otherwise, the material kept its cargo encapsulated. The team plans to continue developing and testing the material, eventually in the clinical setting as a wound dressing that can respond to emergent infections.

“We think this is something that does have the potential to be translated to the clinic,” Shukla said. “We’re continuing to work toward that.”

Additional authors on the study are Dahlia Alkekhia and Cassi LaRose from Brown’s Center for Biomedical Engineering.