Using computer-​based genome analysis have now discovered a new class of natural products that might one day serve as antibiotics. 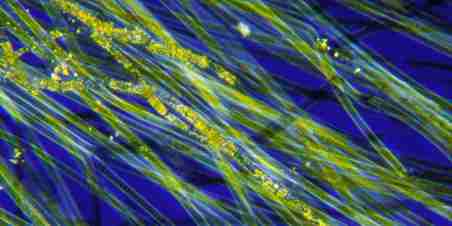 It is mainly known about cyanobacteria that they carry out photosynthesis like plants. However, this group of bacteria also produces many interesting natural products, including the newly discovered lipopeptides. (Photograph: Adobe Stock)

Bacteria show great promise as a source of active ingredients. Using computer-​based genome analysis, researchers at ETH Zurich have now discovered a new class of natural products that might one day serve as antibiotics.

Animals, plants, fungi and bacteria – each and every organism carries a whole armoury of chemical compounds that enable it to interact with its environment, attract partners or deter enemies. Bacteria, among the oldest forms of life on earth, contain a host of complex chemical structures, accumulated over millions of years of evolution.

Many of these metabolites have proved highly effective as active ingredients in human medicine. Indeed, around one-​third of the medicinal drugs approved today are derived from natural products. This includes most antibiotics.

Unlocking the chemical mysteries of bacteria is, however, not all that easy. The snag is that many types of bacteria are difficult, if not impossible, to cultivate in the laboratory. And, frequently, it is only in tandem with other organisms that they produce natural products that are of interest to medicine.

The application of bioinformatics and modern DNA sequencing methods can significantly expedite the hunt for new active ingredients. Using this approach, a research team led by Jörn Piel, Professor of Microbial Interactions at ETH Zurich, has now discovered a new synthetic pathway for peptide natural products that appears to be widespread in bacteria. Their findings were recently published in the Proceedings of the National Academy of Sciences.

Narrowing down the options

It was by combing through vast digital libraries of bacterial genomes that the researchers found what they were looking for. First, they hunted for blueprints of peptides – small protein molecules – and then for the blueprints of enzymes that can modify these peptides. These enzymatic modifications generate complex natural products in the bacteria; many of those products display special activity or added stability.

Since the peptide blueprints characteristic patterns, the researchers were able to use search algorithms to find them. The blueprints for these peptide natural products are stored in compact form in the genome. And right next to this peptide gene is where the genes for the enzymes sit.

“These enzymes function in very different ways, meaning that peptide natural products have huge potential to deliver new active ingredients,” explains Florian Hubrich, one of the lead authors of the study.

From blueprint to natural product

The genome analyses suggested that the enzymes were the key to discovering a whole new class of natural products. The researchers sorted similar candidates into groups, classified according to the blueprints of the different enzyme types. In the process, they realised that in one of the largest groups the function of the enzymes was still unknown.

For three of the potential natural products from this group, the researchers then conducted lab tests to verify the computer predictions. To this end, they inserted the relevant genes into laboratory bacteria and analysed which substances the microorganisms actually produced. This led to the discovery that members of this new natural product class  are ring-​shaped peptide molecules with a fatty acid appendage.

Certain lipopeptides – peptides connected to fatty acids – are known to be active ingredients. The antibiotic daptomycin, for example, has a very similar structure. However, the biotech process required to produce this drug is still very complex.

This is because the bacterium in which the antibiotic is produced also generates a number of natural product variants, each with fatty acids of different lengths. Only one of these variants is used as a drug, which must then be purified from the bacterial cells using a complicated process. It is here that Piel sees the biggest benefit of this new class of natural products.

Daptomycin and other lipopeptides are assembled from amino acids in the organism of origin by a giant enzyme specifically responsible for this. These giant enzymes are not easily accessible for genetic engineering purposes. By contrast, the new class of peptide natural products are easier to produce – in a process based on genetically modified bacteria. Moreover, this method can also be used to generate new natural product variants.

In just a few steps, the researchers are able to modify the blueprints of these natural products in order to create “customised” active ingredients. For example, the sequence of amino acids in the peptide backbone can be modified by means of mutations in the corresponding gene. Furthermore, this macro-​level genome analysis has identified a host of new enzyme candidates that could be combined with a peptide gene on a modular basis.

The present study describes a total of three enzymes that attach fatty acids of differing chain lengths to a peptide. “Initial experiments show that it is indeed possible to produce these customised lipopeptides in the lab,” says Anna Vagstad, another of the study’s lead authors. The next step will be to investigate the biological activity of this new substance class.

“There’s often minimal financial incentive for pharmaceutical companies to develop new antibiotics,” Vagstad says, “but we researchers can at least take the first step, which is to search for new active ingredients.”

Source: Based on ETH Zurich release