Study reveals insights into the properties of a recently discovered family of superconductors, with implications for future applications in quantum computing and other technologies. 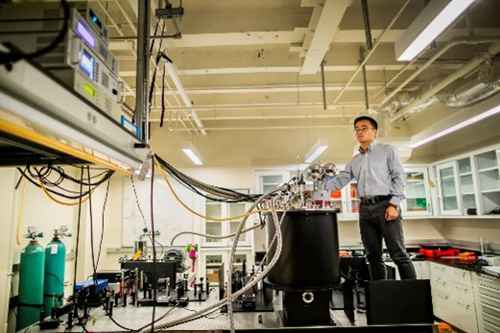 Already used in computers and MRI machines, superconductors—materials that can transmit electricity without resistance—hold promise for the development of even more advanced technologies, like hover trains and quantum computing. Yet, how superconductivity works in many materials remains a mystery that limits its applications.

A new study published in Nature Physics sheds light on the superconductivity of AV₃Sb₅, a recently discovered family of kagome metals. The research was led by Liang Wu of the School of Arts & Sciences and conducted by Yishuai Xu, a postdoc in Wu’s lab, and graduate students Zhuoliang Ni and Qinwen Deng, in collaboration with researchers from the Weizmann Institute of Science and University of California, Santa Barbara.

Since their discovery, superconductors with the chemical formula AV₃Sb₅, where A refers to cesium, rubidium, or potassium, has generated immense interest for their exotic properties. The compounds feature a kagome lattice, an unusual atomic arrangement that resembles and takes its name from a Japanese basketweave pattern of interlaced, corner-sharing triangles. Kagome lattice materials have fascinated researchers for decades because they provide a window into quantum phenomena such as geometrical frustration, topology, and strong correlations.

While previous research on AV₃Sb₅ has discovered the coexistence of two different cooperative electronic states—the charge-density wave order and superconductivity—the nature of the symmetry breaking that accompanies these states has been unclear. In physics, symmetry refers to a physical or mathematical feature of a system that remains unchanged under certain transformations. When a material transitions from a normal, high-temperature state to an exotic, low-temperature state like superconductivity, it undergoes symmetry breaking. Wu, whose lab develops and uses time-resolved and nonlinear optical techniques to study quantum materials, set out to clarify the nature of symmetry-breaking when AV₃Sb₅ enters the charge-density wave phase.

AV₃Sb₅ exhibits what researchers call a “cascade” of symmetry-broken phases. In other words, as the system cools down, it begins to enter a symmetry breaking state, with lower and lower temperatures leading to additional broken symmetries. “In order to use superconductors for applications, we need to understand them,” Wu says. “Because superconductivity develops at even lower temperatures, we need to understand the charge-density wave phase first.”

In its normal state, AV₃Sb₅ consists of a hexagonal crystal structure, composed of kagome lattices of vanadium (V) atoms coordinated by antimony (Sb) stacked on top of one another, with sheets of cesium, rubidium, or potassium in between each V-Sb layer. The structure is six-fold rotationally symmetric; when rotated by 60°, it stays the same. To find out whether AV₃Sb₅ retains its six-fold symmetry in the charge-density wave phase, the researchers performed scanning birefringence measurements on all three members of the AV₃Sb₅ family. Birefringence, or double refraction, refers to an optical property exhibited by materials with crystallographically distinct axes, a principal axis and a non-equivalent axis. When light enters the material along the non-equivalent axis, it splits in two, with each ray polarized and traveling at different speeds.

“In a kagome plane, the linear optical response should be the same along any direction, but they’re not in AV₃Sb₅ because between the two kagome layers there’s a relative shift,” Wu says, explaining that the birefringence measurements revealed the difference between two orthogonal directions in the plane and a phase shift between the two layers that reduces the six-fold rotational symmetry of the materials to two-fold when they enter the charge-density wave state. “This was not clear to the physics community before.”

Distinct axes are not the only explanation for the rotation of the light polarization plane. When linearly polarized light encounters a magnetic surface, it also changes, a phenomenon known as the magneto-optical Kerr effect. After separating out the property of birefringence by sending light along the principal axis in samples of AV₃Sb₅, the researchers used a second optical technique to measure the onset of the Kerr effect. For all three metals, the experiments reveal that the Kerr effect begins in the charge-density wave state. This finding indicates that the formation of charge-density waves breaks another symmetry, time-reversal symmetry. The simplest way to break time-reversal symmetry—which holds that the laws of physics remain the same whether time runs forward or backwards—is to use a permanent magnet, like those we put on a refrigerator, Wu says.

However, the Kerr effect is only observable at low temperatures with high resolution, indicating that the kagome metals are not substantially magnetic. “With these quantum materials,” Wu says, he and his collaborators theorize that time-reversal symmetry is “not broken by a permanent magnet but by a circulating loop current.” To confirm the nature of time-reversal symmetry breaking in the charge-density wave state, the researchers performed a third experiment in which they measured the circular dichroism, or the unequal reflectivity of left-handed and right-handed circularly polarized light, of the charge density wave phase. “We still need further work, but this finding really supports the possibility of circulating loop currents,” the existence of which would suggest the unconventional nature of superconductivity in the metals, says Wu.

In 2018 Congress passed the National Quantum Initiative Act, with the goal of advancing research on quantum materials and the development of quantum technology. Quantum materials include those with topological properties and those with correlation, like the kagome metals AV₃Sb₅. While Wu’s previous research centered on the former category and antiferromagnets, he says that the scanning optics technique that he’d developed for these studies presented a “ready and versatile tool” for studying symmetry breaking in new kagome metals.