A new swab test that identifies potentially dangerous cervical cell changes up to four years before they happen. 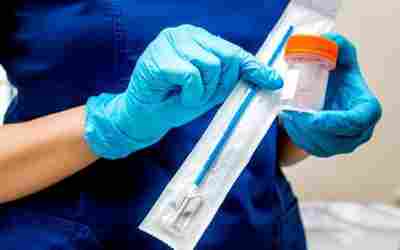 The research, published in Genome Medicine, found that the new cervical screening method was more sensitive than other currently available tests and could reliably identify advanced cell changes and cervical cancer.

Additionally, it was able to predict advanced cell changes in 55% of women who had an HPV infection but no visible cell changes under the microscope, but who went on to develop advanced cell changes within the following four years. The test’s development is part of a wider programme aimed at developing a single screening test to predict the future risk of four cancers: breast, womb, cervical and ovarian.

The researchers hope that the development will enable earlier treatment for those who are predicted to develop the disease.

The swab test was developed by Professor Martin Widschwendter (UCL EGA Institute for Women’s Health, and the European Translational Oncology Prevention and Screening Institute at University of Innsbruck) and his team.

The test works by examining the DNA methylation, a type of modification “on top” of the DNA, of cervical cells. It can be affected by environmental and lifestyle factors, and some changes increase the risk of certain diseases such as cancer.

The new method of analysis out-performed cytology and other newer, molecular tests which are in development for detecting those with CIN3 and cancer.

Professor Widschwendter said: “Vaccination against the causes of cervical cancer is now widely implemented and is leading to changes in the amount and types of the virus circulating in the community. In turn, our approaches to cervical screening must adapt so that programmes continue to deliver benefit.

“Importantly, our other work has shown how testing the same cervical sample can also deliver information on a woman’s risk of three other major cancers – breast, ovarian and womb cancers.

In women in the UK, cervical cancer is the 14th most common cancer, with around 3,200 new cases every year.

Currently, in England, women and people with cervixes are invited to attend a cervical screening appointment every three years. This interval has been moved to five-yearly in Scotland and Wales, with plans for England to follow.

When invited for cervical screening, a sample is taken from the cervix using a soft brush. This sample is then tested for the presence of high-risk Human papillomavirus (HPV), the common virus which causes 99.8% of cervical cancers.

If high-risk HPV is present, the cells are looked at under a microscope for the presence of changes that could lead to cancer if left untreated – this “follow-up”, or secondary testing is called cytology. Anyone who is found to have abnormal cells on the cervix, called Cervical Intraepithelial Neoplasia (CIN), is then referred on for a further appointment, where the cervix is looked at closely by a specialist with a colposcope, an instrument that magnifies the view of the cervix.

Anyone with early cell changes (CIN1-2) will be screened more regularly, until the cells have turned back to normal, or treatment is needed. Those with advanced cell changes (CIN3) will be treated using a procedure called LLETZ (“Large loop excision of the transformation zone”), where the abnormal cells are removed before they turn into a cancer.

CEO of The Eve Appeal, Athena Lamnisos, said: “It’s so welcome to see screening tools and predictive tests becoming more effective. We want to prevent cancer – and we know with cervical cancer that we can intervene at an early stage.

“This new method is more specific and doesn’t lead to over treatment which is good news for cervical cancer prevention and great news for everyone who needs to be screened.”

The research team is now moving into the next stage of the study, where they will test the new technology on screening samples from women who have been vaccinated against HPV, and on self-sampled vaginal swabs.