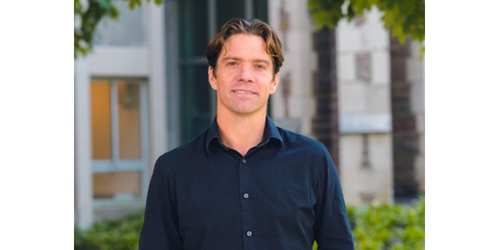 The fundamental building blocks of a quantum computer are quantum bits, or qubits. Some of the most common examples of qubits are based on the different energy states of single electrons.

In a recent Nature paper, a team led by the U.S. Department of Energy (DOE)’s Argonne National Laboratory has announced the creation of a new qubit platform formed by freezing neon gas into a solid at very low temperatures, spraying electrons from a light bulb’s filament onto the solid and trapping a single electron there. This system shows great promise to be developed into ideal building blocks for future quantum computers.

Kater Murch, professor of physics in Arts & Sciences at Washington University in St. Louis, is a senior co-author of the paper. He explains some of the science behind the discovery in this short video animation:

A key component in the team’s new qubit platform is a chip-scale microwave resonator made out of a superconductor. (The much larger home microwave oven is also a microwave resonator.) Superconductors — metals with no electrical resistance — allow electrons and photons to interact together at near to absolute zero with minimal loss of energy or information.

“The microwave resonator crucially provides a way to read out the state of the qubit,” Murch said. “It concentrates the interaction between the qubit and microwave signal. This allows us to make measurements telling how well the qubit works.”

To realize a useful quantum computer, the quality requirements for qubits are extremely demanding. While there are various forms of qubits today, none of them is ideal. But the new neon system described in this paper is very good, the co-authors said in a news release shared by the DOE, and they plan to continue optimizing and improving its coherence times.

As part of Washington University’s new Center for Quantum Leaps, Murch and members of his research group use nano-fabrication techniques to construct superconducting quantum circuits that allow them to probe fundamental questions in quantum mechanics.

Physics graduate student Kaiwen Zheng is working with Murch to build on work initiated at Argonne National Laboratory, developing the capabilities to trap electrons on neon in the group’s facilities housed in Crow Hall on the Danforth Campus. They have developed technologies to deposit neon thin film in selective locations at cryogenic temperatures and patterned the trapping electrodes. Now, they are looking at ways to mitigate decoherence in new qubit systems, thus improving its longevity.

“At the moment, the qubit we have is based on the motion of the electron,” Murch said. “We call this a charge qubit, but one of the exciting future prospects will be to convert this into a spin qubit, relating to the spin of the electron. This should make the qubit much less sensitive to its environment, increasing the quality of the qubit by orders of magnitude.”