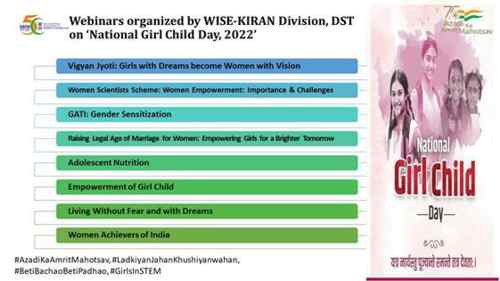 Young girls as well as women scientists at different levels participated in various programmes to encourage participation of women in science on the occasion of National Girl Child’s Day.

The Department of Science and Technology (DST) organised number of events like webinars to encourage girls to dream of being part of some of the top scientific institutes in the country, talks to celebrate success of women scientists, sensitization workshops to encourage gender equity in institutions, quizzes to commemorate women achievers of India as well as lectures that discussed issues of women’s participation in science.

The events were organized under different programmes of Women In Science and Engineering (WISE-KIRAN) Division of DST to celebrate ‘National Girl Child Day’ on 24 January 2022 under ‘Azadi Ka Amrit Mahotsav’.

Chancellor, Indira Gandhi Delhi Technical University for Women (IGDTUW), New Delhi, highlighted the need to empower the girl students and underlined that girl student should dream big. Dr. Nisha Mendiratta, Head & Advisor WISE-KIRAN Division, DST, conveyed that the girls need to be confident and courageous to overcome the gender stereotypes and work towards grooming themselves as progressive women to Vigyan Jyoti scholars. Around 10,000 Girls participated in this webinar along with their teachers and peers.

A motivational talk on ‘Women Empowerment: Importance & Challenges’ was organized by DST-TIFAC under Women Scientist Scheme-C (WOS-C) of DST. Dr. Nidhi Sandal from Institute of Nuclear Medicine & Allied Sciences (INMAS), Defence Research & Development Organisation (DRDO), emphasized that women are now contributing enormously in the science & technology domain, and this is evident from the technologies developed and patents filed by them in recent years. She highlighted the achievements of women scientists across the globe in the area of Intellectual Property Rights (IPR). Around 115 women scientists being trained of IPRs under WOS-C programme attended this talk.

Shri Padmavati Mahila Visvavidyalayam, Tirupati, a women university supported under CURIE Programme of DST organized webinar on ‘Raising Legal Age of Marriage for Women: Empowering Girls for a Brighter Tomorrow’. Other women universities like Avinashilingam Institute for Home Science and Higher Education for Women, Coimbatore organized a webinar on “Adolescent Nutrition” and “Empowerment of Girl Child” while Indira Gandhi Delhi Technical University for Women, Delhi held a talk on ‘Living without Fear and with Dreams’. Dr. Rashmi Singh, IAS, Special Secretary and Director Department of Women and Child and Social Welfare, Govt. of NCT of Delhi, emphasized that students should become independent and fearless in their careers.