Anew method to anchor single atoms of platinum-group metals on nanometer-sized islands allows for efficient use of these expensive metals as catalysts for a wide variety of applications. 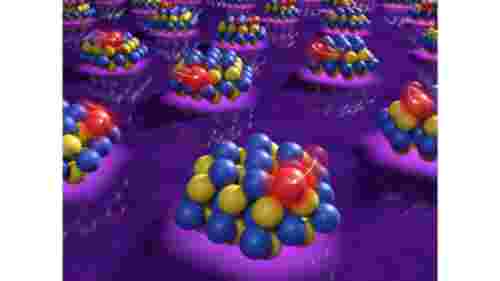 Researchers have found a way to confine platinum-group atoms to small cerium-oxide islands, which could minimize the amount of expensive metals required in many industrial catalysts. Image courtesy of Mike Perkins, Pacific Northwest National Laboratory.

Anew method to anchor single atoms of platinum-group metals on nanometer-sized islands allows for efficient use of these expensive metals as catalysts for a wide variety of applications.

Reporting in the journal Nature, researchers including Professor Bruce Gates, Department of Chemical Engineering at the University of California, Davis, showed that platinum atoms could be confined on small cerium-oxide islands within a porous material to catalyze reactions without sticking to each other, which has been a major stumbling block for their use. The study was led by Arizona State University Professor Jingyue Liu, Gates, and Washington State University Professor Yong Wang.

“The stabilization of precious metals to allow each atom to be a catalyst is a holy grail in the catalysis field,” said Wang, who is also a laboratory fellow at Pacific Northwest National Laboratory. “We are not only using the least amount of platinum group metals but are also making each atom much more reactive.”

Catalysts, which speed up chemical reactions, are key to the technologies used in making chemicals and fuels and for cleaning up pollutants, including exhaust from cars, trucks and fossil fuel power plants. Many catalysts contain precious metals such as platinum, rhodium and palladium, which are extremely expensive.

Researchers in the early 1990s began investigating how to isolate metal atoms as catalysts, but they hadn’t been able to stabilize them at the high temperatures required for catalytic converters and other practical applications. Once the metal atoms are exposed to the conditions required for reactions, they tend to clump together.

The research team solved the problem by dispersing the metal atoms within the nanometer-sized islands of cerium oxide. The numerous islands lie on a commercial silicon-dioxide support that is widely used in many common catalytic reactions, but the metal atoms are excluded from the support. With its extremely high surface area, the silicon dioxide is able to anchor a very large number of the islands holding the metal atoms within a small volume. The cerium oxide sticks like a glue to the silicon dioxide and holds the individual metal atoms tightly so that they don’t wander off to find each other, clump and become ineffective.

The researchers found that the island-confined metal atoms were stable in catalyzing reactions under both oxidative and reductive conditions. Oxidation, in which oxygen is added to a substance, is used in emission control technology to remove harmful carbon monoxide and unburned hydrocarbons. Reduction, in which hydrogen is present and reacts with other molecules, is used for many industrial applications, including to produce fuels, fertilizers, and drugs.

“The atomic precision of the manufacture of the new catalysts may open avenues to design catalysts with unprecedented flexibility in the placement of targeted numbers of atoms on each island,” Gates said. “That allows us to investigate the reactivity and identify the most reactive species—to find out which structures and configurations are most efficient.”

The researchers hope to further study the approach for a wide range of catalytic applications.

“This work gives the scientific community a new tool in the toolkit to understand the catalytic site requirement for specific reactions of interest and for developing highly active and stable new catalysts,” said Liu. “It creates tremendous opportunities for catalytic technology and takes atomically dispersed metal catalysts one major step closer to practical applications.”