The researchers believe these findings help explain how mosquitoes find hosts, since human skin, regardless of overall pigmentation, emits a strong red orange “signal” to their eyes. 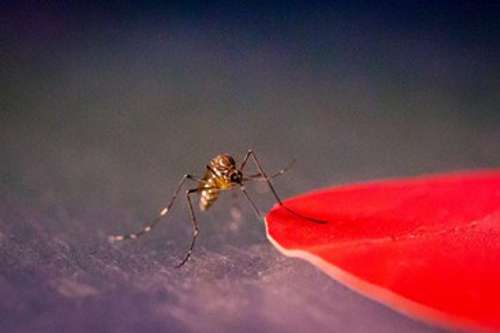 Beating the bite of mosquitoes this spring and summer could hinge on your attire and your skin. New research led by scientists at the University of Washington indicates that a common mosquito species — after detecting a telltale gas that we exhale — flies toward specific colors, including red, orange, black and cyan. The mosquitoes ignore other colors, such as green, purple, blue and white. The researchers believe these findings help explain how mosquitoes find hosts, since human skin, regardless of overall pigmentation, emits a strong red orange “signal” to their eyes.

“Mosquitoes appear to use odors to help them distinguish what is nearby, like a host to bite,” said Jeffrey Riffell, a UW professor of biology. “When they smell specific compounds, like CO2 from our breath, that scent stimulates the eyes to scan for specific colors and other visual patterns, which are associated with a potential host, and head to them.”

The results, published Feb. 4 in Nature Communications, reveal how the mosquito sense of smell — known as olfaction — influences how the mosquito responds to visual cues. Knowing which colors attract hungry mosquitoes, and which ones do not, can help design better repellants, traps and other methods to keep mosquitoes at bay.

“One of the most common questions I’m asked is ‘What can I do to stop mosquitoes from biting me?’” said Riffell, who is senior author on the paper. “I used to say there are three major cues that attract mosquitoes: your breath, your sweat and the temperature of your skin. In this study, we found a fourth cue: the color red, which can not only be found on your clothes, but is also found in everyone’s skin. The shade of your skin doesn’t matter, we are all giving off a strong red signature. Filtering out those attractive colors in our skin, or wearing clothes that avoid those colors, could be another way to prevent a mosquito biting.”

In their experiments, the team tracked behavior of female yellow fever mosquitoes, Aedes aegypti, when presented with different types of visual and scent cues. Like all mosquito species, only females drink blood, and bites from A. aegypti can transmit dengue, yellow fever, chikungunya and Zika. The researchers tracked individual mosquitoes in miniature test chambers, into which they sprayed specific odors and presented different types of visual patterns — such as a colored dot or a tasty human hand.

Without any odor stimulus, mosquitoes largely ignored a dot at the bottom of the chamber, regardless of color. After a spritz of CO2 into the chamber, mosquitos continued to ignore the dot if it was green, blue or purple in color. But if the dot was red, orange, black or cyan, mosquitoes would fly toward it.

Humans can’t smell CO2, which is the gas we and other animals exhale with each breath. Mosquitoes can. Past research by Riffell’s team and other groups showed that smelling CO2 boosts female mosquitoes’ activity level — searching the space around them, presumably for a host. The colored-dot experiments revealed that after smelling CO2, these mosquitoes’ eyes prefer certain wavelengths in the visual spectrum.

It’s similar to what might happen when humans smell something good.

“Imagine you’re on a sidewalk and you smell pie crust and cinnamon,” said Riffell. “That’s probably a sign that there’s a bakery nearby, and you might start looking around for it. Here, we started to learn what visual elements that mosquitoes are looking for after smelling their own version of a bakery.”

Most humans have “true color” vision: We see different wavelengths of light as distinct colors: 650 nanometers shows up as red, while 450 nanometer wavelengths look blue, for example. The researchers do not know whether mosquitoes perceive colors the same way that our eyes do. But most of the colors the mosquitoes prefer after smelling CO2 — orange, red and black — correspond to longer wavelengths of light. Human skin, regardless of pigmentation, also gives off a long-wavelength signal in the red-orange range.

Genes determine the preference of these females for red-orange colors. Mosquitoes with a mutant copy of a gene needed to smell CO2 no longer showed a color preference in the test chamber. Another strain of mutant mosquitoes, with a change related to vision so they could no longer “see” long wavelengths of light, were more color-blind in the presence of CO2.

“These experiments lay out the first steps mosquitoes use to find hosts,” said Riffell.

More research is needed to determine how other visual and odor cues — such as skin secretions — help mosquitoes target potential hosts at close range. Other mosquito species may also have different color preferences, based on their preferred host species. But these new findings add a new layer to mosquito control: color.

Co-lead authors on the paper are Diego Alonso San Alberto, a researcher and lecturer in the UW Department of Biology, and Claire Rusch, a UW doctoral alum in biology. Co-authors are Yinpeng Zhan and Craig Montell at the University of California, Santa Barbara, and Andrew Straw at the University of Freiburg in Germany.