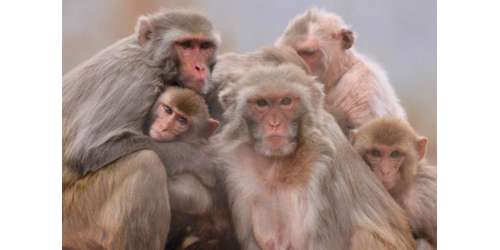 Just like humans, some monkeys find it easier to “fit in” when they are in social situations. By studying spontaneous social behaviors of free-ranging juvenile rhesus macaques, Emory University researchers and their colleagues at Baylor College of Medicine have shown that, similar to humans, the macaques’ social behaviors display significant genetic influences, or heritability.

The study results were published in Autism Research.

The findings on atypical social behaviors displayed by some juvenile macaques could lead to better models to study the genetics of autism-related behaviors. In the U.S., approximately 1 in every 44 children are estimated to meet the diagnostic criteria for this developmental disability.

“This exploratory study lays the groundwork for future research by showing that some juvenile macaques exhibit atypical social behaviors, some of which are similar to those observed in autism spectrum disorders (ASD), and we found that genetics contributes to both sets of behaviors,” says lead author Chris Gunter, PhD, formerly of Emory and now senior advisor to the director at the National Human Genome Research Institute.

Researchers observed free-ranging juvenile macaques interacting with other members of their social groups at the Yerkes National Primate Research Center Field Station. They evaluated more than 200 juvenile macaques’ behavior using several tools including an adapted version of the Social Responsiveness Scale, a questionnaire healthcare professional widely used as a screening tool for ASD in children.

“Right now, autism researchers don’t really have a good animal model,” says Mar Sanchez, PhD. “The Yerkes Field Station provided us a unique opportunity to study natural behaviors among a large group of juvenile macaques as they grew up in a social environment.”

Sanchez is professor of psychiatry and behavioral sciences at Emory University School of Medicine and the division chief of Developmental and Cognitive Neuroscience at Yerkes.

“The macaques we studied did not have autism. Rather, they sometimes displayed behavior combinations similar to those used to diagnose ASD in children. In addition to observing typical behaviors in macaques’ interactions, such as social grooming, we also identified animals exhibiting combinations of repetitive behaviors and solitary play, which are more like the diagnostic criteria for ASD. This gives us hope rhesus monkeys may be able to serve as animal models for better understanding the development of disorders of social behavior.”

Jeffrey Rogers, PhD, led the Baylor College of Medicine (BCM) team that performed genetic analysis. The results showed variants in a macaque’s exome, the protein-coding genes within the genome, influenced between 40 to 80 percent of individual scores for specific social behaviors. These figures represent heritability, or how much genetic variation influences a given trait in a specific population. Rogers is an associate professor in BCM’s department of molecular and human genetics.

On average, genetics is estimated to influence 60-80 percent of the combination of human behaviors that are part of the diagnostic criteria for ASD, so the macaque results are consistent with those seen in human studies. Among particular monkey behaviors the researchers evaluated, the highest heritability scores were for frequency of soliciting grooming, frequency of sitting alone, and duration of solitary play.

Sex and dominance/social status of each macaque within their social group also influenced the frequency of atypical social behaviors. This suggests the important role of sex and social experiences/environment on individual variation of social behavior, in addition to genetics.

As part of their study, the researchers also analyzed the macaque versions of 143 genes shown to influence risk for ASD in humans. A handful of these were associated with specific behaviors in macaques.

“We are looking forward to studying more than just the 143 genes we could examine in this pilot study to see if we can find other genetic variants linked directly to the behaviors we want to study further,” Gunter says.