The study findings could lead to better treatments for respiratory illnesses 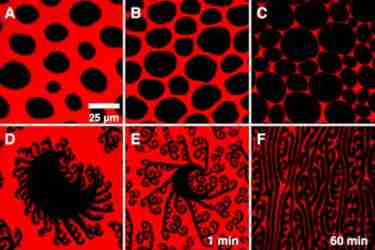 Squares A-F show the evolution of the crystalline structures of lung surfactant monolayers as they “finger” or elongate with increasing pressure. By observing this evolution, scientists can better understand how lung surfactant spreads throughout the lungs and helps humans breathe easier. Credit: Zasadzinski Research Lab, University of Minnesota

The paper is published in Science Advances, a peer-reviewed, multidisciplinary scientific journal published by the American Association for the Advancement of Science.

Both human and animal lungs naturally produce a surfactant, a substance consisting of lipids and proteins that coats the lungs and decreases the surface tension as we inhale and exhale, making it easier to breathe.

Respiratory illnesses like pneumonia or COVID-19 can impede the lung surfactant from working properly, leading to complications in breathing. A similar issue occurs in pre-term babies, who sometimes haven’t yet developed the ability to produce the substance and suffer from Neonatal Respiratory Distress Syndrome. Right now, treatments consist of giving humans replacement surfactant taken from animal lungs, but researchers have been working to create synthetic surfactants to treat these conditions for years.

“The main purpose of lung surfactant is to minimize the amount of energy required to breathe,” said Cain Valtierrez-Gaytan, lead author on the paper and a Ph.D. student in the University of Minnesota Department of Chemical Engineering and Materials Science. “As scientists, we want to determine how the various components of the surfactant interact with each other at a fundamental level so we can know what to include in a potential synthetic surfactant.”

While lung surfactant comprises many different materials, the University of Minnesota team was initially intrigued by the role of cholesterol, a type of lipid that occurs naturally in animal and human cells.

Using a Langmuir trough along with a high-resolution optical microscope, the researchers took images of a few of the lipids that make up lung surfactant—dipalmitoylphosphatidylcholine, hexadecanol or palmitic acid, and dihydrocholesterol—at the monolayer level, or a film consisting of one layer of molecules at the interface between air and water. By testing how the monolayers behaved at different temperatures and pressures, they uncovered two previously unconfirmed phenomena that align with fundamental theories in materials science.

For one, the researchers found that the surfactants organize as equilibrium structures, meaning that if the crystalline parts of the molecules change shape and grow as pressure increases, they have the ability to go back to their original shape if that pressure is removed. This is a fairly rare occurrence, as monolayers typically don’t return to their original structure once it’s altered.

The microscope images also showed that when the pressure is increased, the crystalline parts of the monolayers “finger” or elongate. This is due to a chemical instability, the same instability that causes ice to splay out in fractals when a snowflake is formed. Knowing both of these properties helps the researchers better understand how fast the surfactant spreads across the lungs and how it reduces surface tension in the lungs.

“We can use basic materials science theories, like instabilities and equilibrium, to try to understand how the lung surfactant actually works,” said Joe Zasadzinski, senior author on the paper and a professor in the University of Minnesota Department of Chemical Engineering and Materials Science. “Then we can make predictions based on fundamental physics as to how these materials are going to organize, which will ultimately help us formulate the next generation of clinical surfactant materials.”