The study findings have many implications for agricultural and “green” bioengineering practices. 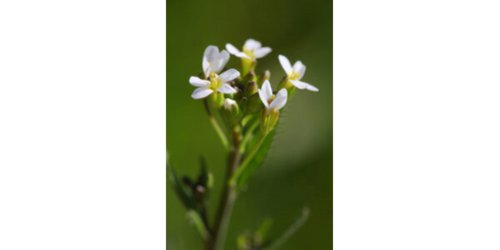 Plants rely on their ability to sense light for survival. But unlike animals, plants don’t have eyes full of photoreceptors to capture and convey messages from visual stimuli. Instead, photoreceptors that detect different wavelengths of light are found in cells throughout the plant, allowing plants to regulate their lifecycles and adjust to environmental conditions.

Phytochromes are one of the main collections of photoreceptors. They sense red and far-red light as well as temperature. But even though they were identified 70 years ago — and they are important for many aspects of plant growth and development critical to agriculture — it has remained unclear how phytochromes work.

Now, scientists at Washington University in St. Louis and the Van Andel Institute (VAI) have determined the molecular structure of one of these vital photoreceptors — for an isoform known as phytochrome B or PhyB — revealing a wholly different structure than previously known. The findings, published March 30 in Nature, have many implications for agricultural and “green” bioengineering practices.

“Plant phytochromes are amazing molecular machines that perceive light and temperature through very specific conformational changes,” said Richard Vierstra, the George and Charmaine Mallinckrodt Professor of Biology in Arts & Sciences at Washington University and co-corresponding author of the study.

“The PhyB structure that we uncovered in this study tells us something that we never expected,” Vierstra said. “We learned that plant phytochromes are topologically complex, asymmetric and look nothing like their microbial relatives. And that they likely work in a wholly unexpected way.”

“Photoreceptors, such as PhyB, help plants sense and respond to the world around them by influencing life-sustaining processes such as shade avoidance, seed germination, determination of flowering time and development of chloroplasts, which convert light into usable energy,” said Huilin Li of VAI, co-corresponding author of the study.

“Our new structure sheds light onto how PhyB works and has potential for a host of applications in agriculture, renewable energy and even in cellular imaging,” Li said.

Understanding the shape of PhyB is important because its structure directly impacts how PhyB interacts with other molecules to communicate shifts in light conditions and to help plants adapt by driving changes in gene expression. Previous research on only a small piece of PhyB provided a truncated snapshot rather than a detailed rendering of the entire molecule.

“This is the first time we’ve ever seen the entire structure of the phytochrome,” said Sethe Burgie, research scientist in biology at Washington University and co-first author of the study. “We’ve known some of the pieces, but how they interact and work in unison is pretty marvelous. You wouldn’t have guessed what the entire photoreceptor looks like from the sequence.”

To determine their near-atomic resolution image of PhyB, the scientists turned to the form found in one of the most studied plants on Earth, Arabidopsis thaliana. This small flowering plant is an ideal model for research because it reproduces quickly, is small and is easy to grow.

Using VAI’s high-powered cryo-electron microscope, or cryo-EM, the research team snapped nearly 1 million particle images of Arabidopsis PhyB connected to its natural chromophore — a bilin molecule related to heme found in blood that specifically absorbs red and far-red light. They then narrowed the collection down to 155,000 high-quality images, which they used to construct the full picture of PhyB’s structure at a near-atomic level of 3.3 Ångstrom.

Their work revealed a surprise: rather than the expected head-to-head associated parallel structure as seen for their bacterial relatives, the scientists found a complicated 3D structure with both head-to-tail and head-to-head oriented sections, along with a couple of unexpected features that help hold the dimer together. The findings suggest that PhyB is uniquely designed to amplify small changes in light-sensing chromophore into drastic changes in its shape once PhyB absorbs light — a move that communicates the presence of light to the plant.

The discovery is the result of more than a decade of collaboration between the Li and Vierstra labs, and revolutionizes what we know about how PhyB and phytochromes in general function and how they evolved. The new results could have important implications for modern agriculture.

A Vierstra lab team previously published a study in the journal Science that showed that PhyB is a major contributor to temperature sensitivity in plants.

With the actual molecular structure of PhyB now in hand, scientists have a critical blueprint for guiding future efforts to create crop varieties more efficient in capturing light and better suited to a warming world.

“Modifications or mutations of phytochromes may lead to changes in these processes that help plants better cope with temperature changes, like those that we anticipate under global warming,” Burgie said. “Modifying phytochromes might also help expand the geographic area under which certain crops can thrive.”