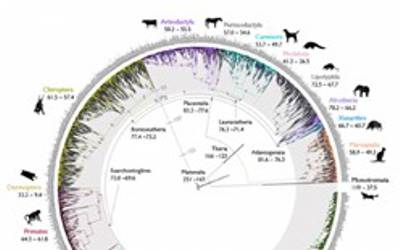 The Nature paper describes a new and fast computational approach to obtain precisely dated evolutionary trees, known as ‘timetrees’. The authors used the novel method to analyse a mammal genomic dataset and answer a long-standing question around whether modern placental mammal groups originated before or after the Cretaceous-Palaeogene (K-Pg) mass extinction, which wiped out over 70% of all species, including all dinosaurs.

The findings confirm the ancestors of modern placental mammal groups postdate the K-Pg extinction that occurred 66 million years ago, settling a controversy around the origins of modern mammals. Placental mammals are the most diverse group of living mammals, and include groups such as primates, rodents, cetaceans, carnivorans, chiropterans (bats) as well as humans.

Co-lead author Dr Sandra Álvarez-Carretero (UCL Genetics, Evolution & Environment), who began the research while based at Queen Mary University of London, said: “By integrating complete genomes in the analysis and the necessary fossil information, we were able to reduce uncertainties and obtain a precise evolutionary timeline. Did modern mammal groups co-exist with the dinosaurs, or did they originate after the mass extinction? We now have a definite answer.”

Co-lead author Professor Phil Donoghue (University of Bristol) said: “The timeline of mammal evolution is perhaps one of the most contentious topics in evolutionary biology. Early studies provided origination estimates for modern placental groups deep in the Cretaceous, in the dinosaur era. The past two decades had seen studies moving back and forth between post- and pre-K-Pg diversification scenarios. Our precise timeline settles the issue.”

With worldwide sequencing projects now producing hundreds to thousands of genome sequences, and with imminent plans to sequence more than a million species, evolutionary biologists will soon have a wealth of information at their hands. However, current methods to analyse the vast genomic datasets available and create evolutionary timelines are inefficient and computationally expensive.

Co-lead author Dr Mario dos Reis (Queen Mary University of London) said: “Inferring evolutionary timelines is a fundamental goal of biology. However, state-of-the-art methods rely on using computers to simulate evolutionary timelines and assess the most plausible ones. In our case, this was difficult due to the gigantic dataset analysed, involving genetic data from almost 5,000 mammal species and 72 complete genomes.”

In this study, the researchers developed a new, fast Bayesian approach to analyse large numbers of genome sequences, whilst also accounting for uncertainties within the data.

Dr dos Reis added: “We solved the computational hurdles by dividing the analysis in sub-steps: first simulating timelines using the 72 genomes and then using the results to guide the simulations on the remaining species. Using genomes reduces uncertainty because it allows rejection of unplausible timelines from the simulations.”

Co-lead author Dr Asif Tamuri (UCL Centre for Advanced Research Computing), who was responsible for assembling the mammal genomic dataset, said: “Our data processing pipeline sourced as much genomic data for as many mammal species as possible. This was challenging because genetic databases contain inaccuracies and we had to develop a strategy to identify poor quality samples or mislabelled data that had to be removed.”

Using their novel approach, the team were able to reduce computation time for this complex analysis from decades to months.

Dr Álvarez-Carretero said: “If we had tried to analyse this large mammal dataset in a supercomputer without using the Bayesian method we have developed, we would have had to wait decades to infer the mammal timetree. Just imagine how long this analysis could take if we were to use our own PCs.

“In addition, we managed to reduce computation time by a factor of 100. This new approach not only allows the analysis of genomic datasets, but also, by being more efficient, substantially reduces the CO2 emissions released due to computing.”

The method developed in the study could be used to tackle other contentious evolutionary timelines that require analysis of large datasets. By integrating the novel Bayesian approach with the forthcoming genomes from the Darwin Tree of Life and Earth BioGenome projects, the idea of estimating a reliable evolutionary timescale for the Tree of Life now seems within reach.

The research team included scientists from UCL, Queen Mary, University of Bristol, Imperial College London, and the University of Cambridge.