Researchers investigate how microbes that can both eat and photosynthesize might evolve in a changing environment. 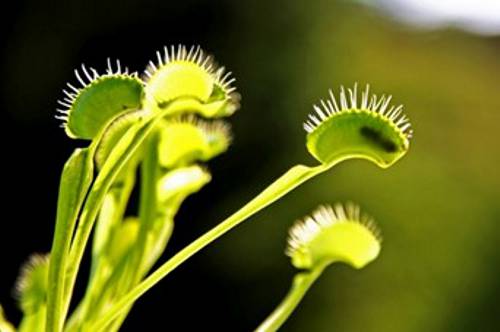 The venus flytrap is a quintessential mixotroph, obtaining nutrients through photosynthesis as well as predation. Photo Credit: Jarino47 Via Istock.

A quick survey of life on Earth will usually yield two groups: those that produce their own nutrients and those that must get them from other lifeforms. Plants generally fall into the first category, called autotrophs, while animals and fungi are almost exclusively the second, heterotrophs. But digging deeper reveals a host of organisms that can do both: mixotrophs.

“You’d think an organism that can do both photosynthesis and heterotrophy has hit the metabolic jackpot,” remarked Holly Moeller, an assistant professor at UC Santa Barbara. “So it’s fascinating to think about what the limits are on that.”

Members of the Moeller lab carried out a three-year experiment to see how two strains of mixotrophs would adapt to changes in temperature and light level. The team found that one strain evolved to be less photosynthetic at higher temperatures, which may have implications for the climate. The results also support the idea that natural selection may have a stronger effect on organisms with less flexible characteristics. The findings appear in the journal Global Change Biology.

The authors were curious if mixotrophs would evolve to become more photosynthetic at higher temperatures over many generations, an inquiry with significance for climate change. “These organisms can be either carbon sources or carbon sinks depending on what process they’re relying on,” explained first author Michelle Lepori-Bui, a former National Science Foundation graduate fellow in the Department of Ecology, Evolution, and Marine Biology, now a marine water quality specialist at Washington Sea Grant.

Lepori-Bui wanted to know if the microbes would adapt to new conditions by simply altering their gene expression, or if they would evolve over many generations, accumulating permanent genetic changes. Previous studies on mixotrophs ran for only a few weeks, not enough time to identify actual evolutionary trends. Moeller and Lepori-Bui planned for an experiment on a much larger scale.

The authors started with two populations of mixotrophs, one that must always photosynthesize and one that only does so in some circumstances. They divided each strain between two light levels and three temperature regimes: 18° Celsius, 24° C and 30° C. Researchers compared the control population (evolved at 24° C) to the various experimental groups at regular points throughout the experiment. Briefly placing the control group under the experimental conditions, they noted how it fared compared to the experimental group that had been continuously exposed to those conditions. Armed with this data, researchers could determine how different populations were changing over the course of the experiment.

The whole study, which began in April 2018, was nearly derailed by the pandemic-response lockdown in March 2020. “Michelle [Lepori-Bui] kept it going over the pandemic with much consternation, strength and grit,” Moeller remarked.

Three years later, they had data from 400 to 700 generations of microbes. Still, deciphering trends from the data was a challenge. “These mixotrophs are super complicated little beasts, and they don’t always want to give us their secrets easily,” Moeller said. The researchers noticed a general increase in heterotrophy at higher temperatures, particularly from the strain that always performed photosynthesis.

This suggests the climate crisis may change the role mixotrophs play in the global carbon cycle. Mixotrophy is more common than scientists had previously realized, especially among plankton in the nutrient-poor open ocean. If mixotrophs shift to be more heterotrophic, they will produce more CO2, which contributes to climate change. This could further raise temperatures and expand nutrient-poor regions of the ocean, creating a feedback loop. “So mixotrophs have the potential to be major players in the carbon cycle,” Moeller noted.

That said, each of the experimental populations were better adapted to their conditions compared to the control group. For instance, the hot groups grew faster and made better use of carbon at high temperatures than the control group did under the same conditions.

“That may mean they’re passing more carbon up the food chain, which gives that carbon the opportunity to get sucked down to the deep ocean and removed from the atmosphere,” Moeller said. But the sheer complexity of global climate systems makes it difficult to predict whether mixotrophs will act as carbon producers or consumers in the future.

The results also support the idea that natural selection has a stronger effect on organisms with more rigid characteristics, or phenotypes. “If they have less flexibility, they have to change over several generations in order to survive,” Lepori-Bui said. However, phenotypic plasticity may cut both ways. On the one hand, the ability to change characteristics during a single lifetime can reduce the pressure to make permanent genetic changes. On the other hand, it gives natural selection material to work with and prevents a lineage from dying off before it can adapt to new conditions.

Moeller plans to continue investigating the role that phenotypic plasticity plays in evolutionary adaptation with bigger studies involving a wider variety of mixotrophs. Earlier this year, the team published a paper examining how becoming a mixotroph can affect a species’ competitive advantage in the game of life. “We’re building this broader theory piecemeal, one tedious experiment at a time,” she said.

With its experiments, the Moeller lab is embarking on exciting new research investigating what really matters when predicting how organisms will adapt in the future. Because of their complexity, mixotrophs are difficult to include in large environmental models, so they’re often left out. More information and data about mixotrophs, and how they might change, will make it easier to include them in predictive models.

“We barely even know how they do what they do in current conditions, much less what they’re going to do in the future,” Moeller said. “And yet it’s also abundantly clear that this has implications for how they relate to other species and the carbon cycle.”