Bacteria, viruses, and fungi work as a network in causing lung infection 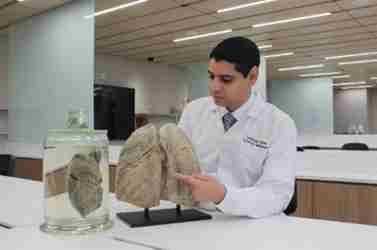 An international research team led by Nanyang Technological University, Singapore (NTU Singapore) has proposed a new way of understanding infections. Their study of close to 400 respiratory samples from patients with bronchiectasis, a chronic lung condition, has shown that microbes in the body exist as a network, and that an infection’s severity could be a result of interactions between these microbes. Through statistical modelling of data from these respiratory samples, the scientists found that flare-ups of coughs and breathlessness occurred more often when there were ‘negative interactions’ between communities of bacteria, viruses and fungi in the airways. A negative interaction occurs when the microbes compete than cooperate with one another. These findings, published in Nature Medicine in April, bring the scientists one step closer to developing a new way of tackling infections, by targeting microbial interactions rather than the specific microbes.

Assistant Professor Sanjay Haresh Chotirmall from the NTU Lee Kong Chian School of Medicine, who led the study, said: “Our current understanding of infections is that they occur when harmful microbes enter our bodies. This model of understanding, however, fails to account for resident microbes or explain why some patients with infection respond to antibiotics to which the microbe is resistant in laboratory testing. We are therefore proposing that microbes exist as networks, where interactions happen and that the resistant antibiotic in this case targets another microbe with which the culprit is interacting.

To investigate interactions between microbes in the airways of patients with bronchiectasis, the team collected respiratory (sputum) samples from 383 patients from Singapore, Malaysia, Italy, and Scotland, including samples before, during and after bronchiectasis flare-ups. After analysing the genetic material from bacteria, fungi and viruses in the samples, the scientists assessed for possible microbial interactions and found that patients with frequent flare-ups had more negative interactions, where microbes compete rather than cooperate, and that the number of such negative interactions increased even further during a flare-up. While changes to interactions between microbes during flare- ups was detected, there was surprisingly minimal change to the type and quantity of microbes present during a flare-up, and even after antibiotics were administered. The scientists believe that these findings suggest that microbial interactions potentially drive frequent flare-ups in patients. Using these findings, the scientists have developed an online tool to help other researchers and physicians analyse microbial interactions in their own patient samples through the microbes’ genetic sequences.