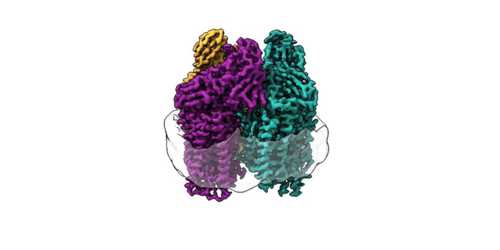 Lipids wrap around the enzyme to protect the active sites and maintain their shape.

Methanotrophic bacteria consume 30 million metric tons of methane per year and have captivated researchers for their natural ability to convert the potent greenhouse gas into usable fuel. Yet we know very little about how the complex reaction occurs, limiting our ability to use the double benefit to our advantage.

By studying the enzyme the bacteria use to catalyze the reaction, a team at Northwestern University now has discovered key structures that may drive the process.

Their findings, published (March 18) in the journal Science, ultimately could lead to the development of human-made biological catalysts that convert methane gas into methanol.

“Methane has a very strong bond, so it’s pretty remarkable there’s an enzyme that can do this,” said Northwestern’s Amy Rosenzweig, senior author of the paper. “If we don’t understand exactly how the enzyme performs this difficult chemistry, we’re not going to be able to engineer and optimize it for biotechnological applications.”

Rosenzweig is the Weinberg Family Distinguished Professor of Life Sciences in Northwestern’s Weinberg College of Arts and Sciences, where she holds appointments in both molecular biosciences and chemistry.

The enzyme, called particulate methane monooxygenase (pMMO), is a particularly difficult protein to study because it’s embedded in the cell membrane of the bacteria.

Typically, when researchers study these methanotrophic bacteria, they use a harsh process in which the proteins are ripped out of the cell membranes using a detergent solution. While this procedure effectively isolates the enzyme, it also kills all enzyme activity and limits how much information researchers can gather — like monitoring a heart without the heartbeat.

In this study, the team used a new technique entirely. Christopher Koo, the first author and a Ph.D. candidate in Rosenzweig’s lab, wondered if by putting the enzyme back into a membrane that resembles its native environment, they could learn something new. Koo used lipids from the bacteria to form a membrane within a protective particle called a nanodisc, and then embedded the enzyme into that membrane.

“By recreating the enzyme’s native environment within the nanodisc, we were able to restore activity to the enzyme,” Koo said. “Then, we were able to use structural techniques to determine at the atomic level how the lipid bilayer restored activity. In doing so, we discovered the full arrangement of the copper site in the enzyme where methane oxidation likely occurs.”

The researchers used cryo-electron microscopy (cryo-EM), a technique well-suited to membrane proteins because the lipid membrane environment is undisturbed throughout the experiment. This allowed them to visualize the atomic structure of the active enzyme at high resolution for the first time.

“As a consequence of the recent ‘resolution revolution’ in cryo-EM, we were able to see the structure in atomic detail,” Rosenzweig said. “What we saw completely changed the way we were thinking about the active site of this enzyme.”

Rosenzweig said that the cryo-EM structures provide a new starting point to answer the questions that continue to pile on. How does methane travel to the enzyme active site? Or methanol travel out of the enzyme? How does the copper in the active site do the chemical reaction? Next, the team plans to study the enzyme directly within the bacterial cell using a forefront imaging technique called cryo-electron tomography (cryo-ET).

If successful, the researchers will be able to see exactly how the enzyme is arranged in the cell membrane, determine how it operates in its truly native environment and learn whether other proteins around the enzyme interact with it. These discoveries would provide a key missing link to engineers.

“If you want to optimize the enzyme to plug it into biomanufacturing pathways or to consume pollutants other than methane, then we need to know what it looks like in its native environment and where the methane binds,” Rosenzweig said. “You could use bacteria with an engineered enzyme to harvest methane from fracking sites or to clean up oil spills.”