Researchers discover a strategy to switch the magnetization in thin layers of a ferromagnet – a technique that could eventually lead to the development of more energy-efficient magnetic memory devices. 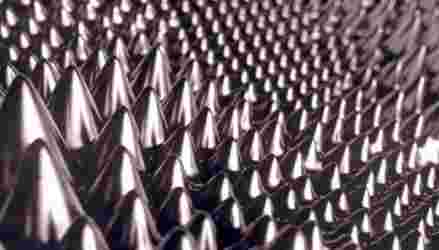 Holding the right material at the right angle, Cornell researchers have discovered a strategy to switch the magnetization in thin layers of a ferromagnet – a technique that could eventually lead to the development of more energy-efficient magnetic memory devices.

For decades, physicists have tried to change the orientation of electron spins in magnetic materials by manipulating them with magnetic fields. But researchers including Dan Ralph, the F.R. Newman Professor of Physics in the College of Arts and Sciences and the paper’s senior author, have instead looked to using spin currents carried by electrons, which exist when electrons have spins generally oriented in one direction.

When these spin currents interact with a thin magnetic layer, they transfer their angular momentum and generate enough torque to switch the magnetization 180 degrees. (The process of switching this magnetic orientation is how one writes information in magnetic memory devices.)

Ralph’s group has focused on finding ways to control the direction of the spin in spin currents by generating them with antiferromagnetic materials. In antiferromagnets, every other electron spin points in the opposite direction, hence there is no net magnetization.

“Essentially, the antiferromagnetic order can lower the symmetries of the samples enough to allow unconventional orientations of spin current to exist,” Ralph said. “The mechanism of antiferromagnets seems to give a way of actually getting fairly strong spin currents, too.”

The team had been experimenting with the antiferromagnet ruthenium dioxide and measuring the ways its spin currents tilted the magnetization in a thin layer of a nickel-iron magnetic alloy called Permalloy, which is a soft ferromagnet. In order to map out the different components of the torque, they measured its effects at a variety of magnetic field angles.

“We didn’t know what we were seeing at first. It was completely different from what we saw before, and it took us a lot of time to figure out what it is,” Jain said. “Also, these materials are tricky to integrate into memory devices, and our hope is to find other materials that will show similar behavior which can be integrated easily.”

The researchers eventually identified a mechanism called “momentum-dependent spin splitting” that is unique to ruthenium oxide and other antiferromagnets in the same class.

This mechanism had been hypothesized but never before documented. When the crystal structure in the antiferromagnet is oriented appropriately within devices, the mechanism allows the spin current to be tilted at an angle that can enable more efficient magnetic switching than other spin-orbit interactions.

Now, Ralph’s team is hoping to find ways to make antiferromagnets in which they can control the domain structure – i.e., the regions where the electrons’ magnetic moments align in the same direction – and study each domain individually, which is challenging because the domains are normally mixed.

Eventually, the researchers’ approach could lead to advances in technologies that incorporate magnetic random-access memory.

“The hope would be to make very efficient, very dense and nonvolatile magnetic memory devices that would improve upon the existing silicon memory devices,” Ralph said. “That would allow a real change in the way that memory is done in computers because you’d have something with essentially infinite endurance, very dense, very fast, and the information stays even if the power is turned off. There’s no memory that does that these days.”