Materials that remember and respond to environment 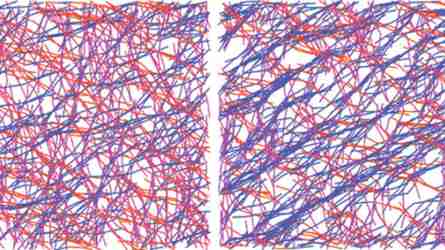 A research team at the University of Chicago is now exploring the properties of a material found in cells which allows cells to remember and respond to environmental pressure. In a paper published in the journal Soft Matter, they teased out secrets for how it works and how it could someday form the basis for making useful materials. Protein strands, called actin filaments, act as bones within a cell. A separate family of proteins called cross-linkers hold these bones together into a cellular skeleton. The study found that an optimal concentration of cross-linkers, which bind and unbind to permit the actin to rearrange under pressure, allow this skeletal scaffolding to remember and respond to past experience. This material memory is called hysteresis. “Our findings show that the properties of actin networks can be changed by how filaments are aligned,” said Danielle Scheff, a graduate student in the Department of Physics who conducted the research in the lab of Margaret Gardel, Horace B. Horton Professor of Physics and Molecular Engineering, the James Franck Institute, and the Institute of Biophysical Dynamics. “The material adapts to stress by becoming stronger.”

To understand how the composition of this cellular scaffolding determines its hysteresis, Scheff mixed up a buffer containing actin, isolated from rabbit muscle, and cross-linkers, isolated from bacteria. She then applied pressure to the solution, using an instrument called a rheometer. If stretched in one direction, the cross-linkers allowed the actin filaments to rearrange, strengthening against subsequent pressure in the same direction. To see how hysteresis depended on the solution’s consistency, she mixed different concentrations of cross-linkers into the buffer. Surprisingly, these experiments indicated that hysteresis was most pronounced at an optimal cross-linker concentration; solutions exhibited increased hysteresis as she added more cross-linkers, but past this optimal point, the effect again became less pronounced. To better understand the structural changes, the team created a computational simulation of the protein mixture Scheff produced in the lab. This computational rendition wielded a more systematic control over variables than possible in the lab. By varying the stability of bonds between actin and its cross-linkers, Redford showed that unbinding allows actin filaments to rearrange under pressure, aligning with the applied strain, while binding stabilizes the new alignment, providing the tissue a ‘memory’ of this pressure. Together, these simulations demonstrated that impermanent connections between the proteins enable hysteresis.