Material that strengthens from vibration 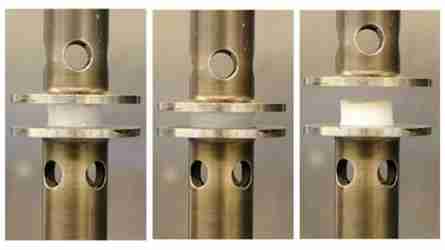 Bone is not just a fixed material—it’s a dynamic set of structures that can adapt their mass and strength based on the loads they must support. Developing that sort of adaptive material has long been the dream of scientists. Now for the first time, scientists at the Pritzker School of Molecular Engineering at the University of Chicago have developed a gel material that strengthens when exposed to vibration. Not only were scientists able to make the material 66 times stronger through vibrations, but they were also able to strengthen only the areas exposed to movement. That sort of specificity could lead to new adhesives and better ways of integrating implants within the body. The results were published Feb. 22 in the journal Nature Materials.

When Esser-Kahn and his group began thinking about how to develop adaptive materials, they looked to take advantage of the “piezoelectric effect,” which gives certain materials the ability to generate an electric charge in response to mechanical stress. Such a charge could instigate a reaction within a material and strengthen it, they proposed. The team tested dozens of different chemistries before they found a polymer gel mixed with thiol-ene reactors and zinc oxide piezoelectric particles. When the material is vibrated, the particles transduce energy and create a thiol-ene reaction, which causes the components in the material to cross-link. That cross-linking essentially forms a second network inside the material, strengthening it. Though the material started off as a soft, collagenous material, as the vibration increased, the material was strengthened further. The team was able to increase the strength of the material to 66 times its original strength, ending with a material that was close to the stiffness of the interior parts of bone. “Just like bone, the material strengthened to the exact amount of power we put into it,” Esser-Kahn said. Not only that, but the material also didn’t just strengthen throughout—it selectively strengthened itself in specific areas where it was stressed to a higher degree. That sort of selective strengthening could lead to materials that can selectively stiffen – and a new way to design structures. Perhaps it could become part of a building that gets stronger as it ages or be used to adhere materials together in an airplane. “Adhesives could be hugely influenced by this,” Esser-Kahn said. “Adhesives are almost always the point of failure in materials. This could lead to specialized adhesives that adhere and set much better.”