Material that is at twice as “magnetostrictive” 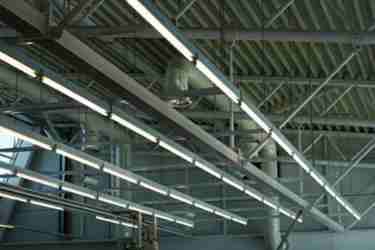 A team led by University of Michigan researchers has developed a material that is at least twice as “magnetostrictive” and far less costly than other materials in its class. In addition to computing, it could also lead to better magnetic sensors for medical and security devices. Magnetostriction, which causes the buzz of fluorescent lights and electrical transformers, occurs when a material’s shape and magnetic field are linked—that is, a change in shape causes a change in magnetic field. The property could be key to a new generation of computing devices called magnetoelectrics. Made of a combination of iron and gallium, the material is detailed in a paper published May 12 in Nature Communication. The team is led by U-M materials science and engineering professor John Heron and includes researchers from Intel; Cornell University; University of California, Berkeley; University of Wisconsin; Purdue University and elsewhere. Magnetoelectric devices use magnetic fields instead of electricity to store the digital ones and zeros of binary data. Tiny pulses of electricity cause them to expand or contract slightly, flipping their magnetic field from positive to negative or vice versa. Because they don’t require a steady stream of electricity, as today’s chips do, they use a fraction of the energy. “A key to making magnetoelectric devices work is finding materials whose electrical and magnetic properties are linked.” Heron said. “And more magnetostriction means that a chip can do the same job with less energy.”

The research team used a process called low-temperature molecular-beam epitaxy to essentially freeze atoms in place, preventing them from forming an ordered structure as more gallium was added. This way, Heron and his team were able to double the amount of gallium in the material, netting a tenfold increase in magnetostriction compared to unmodified iron-gallium alloys. The magnetoelectric devices made in the study are several microns in size—large by computing standards. But the researchers are working with Intel to find ways to shrink them to a more useful size that will be compatible with the company’s magnetoelectric spin-orbit device (or MESO) program, one goal of which is to push magnetoelectric devices into the mainstream. While a device that uses the material is likely decades away, Heron’s lab has filed for patent protection through the U-M Office of Technology Transfer.