Map to highlight areas prone to rainfall-induced erosion in India 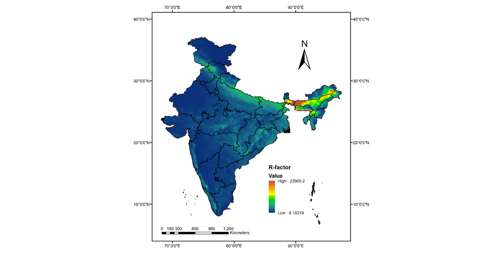 About 68.4% of the total eroded soil in India is affected by erosion induced by water, and rainfall erosivity i.e., the potential of rain to cause soil degradation, is a major contributor to it.

Soil erosion induced by rainfall has been identified as a significant environmental problem globally. The current assessments of rainfall erosivity in India are limited to catchment or regions specific, which is very less to assess rainfall erosivity for a nation like India, having diverse climate properties.

The most vulnerable region to rainfall erosivity (R-factor = 23,909.21 MJ-mm/ha/h/yr) was spotted in the Laitknsew and Cherrapunji region of East Khasi Hillis in Meghalaya state (one of the wettest regions in the world), while the least vulnerable region (R-factor = 8.10 MJ-mm/ha/h/yr) was spotted in the cold and dry Shahi Kangri Mountain region of Ladakh. The study also proposed several empirical equations that can be used by field practitioners.

Parts of Assam and Meghalaya are among Indian zones prone to the most significant rainfall-induced soil erosion having R-factors of the highest range. Having soil of mostly loamy, silt loamy, sand clay loamy, and clay loamy, texture classes and slopy terrain do not show great resistance to soil erosion due to water. The concerned authorities need to adhere to adequate soil conservation measures.

The study also led to the publication of the Indian Rainfall Erosivity Dataset (IRED), which is freely accessible at https://zenodo.org/record/6470233.