Researchers demonstrate the approach on a battery-operated, motorized prosthetic leg 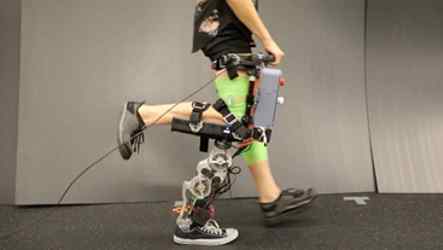 A paper published in the April 2022 issue of IEEE Robotics and Automation Letters outlines the AMBER team's method and represents the first instance of combining hybrid zero dynamics (HZD)—a mathematical framework for generating stable locomotion—with a musculoskeletal model to control a robotic assistive device for walking. The musculoskeletal model is a computational tool to noninvasively measure the relationship between muscle force and joint contact force. HZD is currently used to create stable walking gaits for bipedal robots, and the muscle model represents how much a muscle stretches or contracts with a given joint configuration.

The team demonstrates its approach on a battery-operated, motorized prosthetic leg. The battery powers the motors, which turn the joints. The motor movement is dictated by the mathematical algorithm developed by the researchers.

"The muscle activity pattern of a human walking without the prosthetic is what we want to get closer to," says Rachel Gehlhar (MS '18), a graduate student in mechanical and civil engineering. Directly embedding musculoskeletal models into the optimization problem—the algorithm ultimately producing gaits for the prosthesis—provides a foundation for generating gaits that can feel more natural.

"If you're designing a trajectory for a robotic assistive device, a satisfactory gait should not only be stable but also feel natural," says Amy Li, a graduate student in computation and neural systems. A trajectory represents how the researchers want the prosthetic device to move over time.

"One method of controlling a robot is to describe the desired motions of each of the joints," adds Maegan Tucker (MS '19), a graduate student in mechanical and civil engineering. The robot in this case is the leg prosthesis. The knee and ankle joints follow their own respective trajectories in response to the command sent to the motor. "Our prosthetic device has two actuated joints: the knee and ankle. So the desired motions and velocity of those joints over time is what we tell the robot to do."

One surprising discovery was that the combination of HZD and the muscle models generated desired walking gaits faster than had been expected. Forcing the robotic model to follow the patterns of muscle–tendon relationships adds further constraints to the gait-generation optimization problem, so one might expect the problem to be more difficult to solve. But with these additional constraints, a stable walking gait developed after fewer iterations of the optimization problem.

This work helps bridge the gap between methods that use algorithms to produce desired walking motion and the field of biomechanics, which usually do not overlap. The resulting collaboration brings the AMBER lab a step closer to translating natural motion to a robotic assistive device like a prosthesis, with potential applications in full body exoskeleton devices for people with paraplegia.