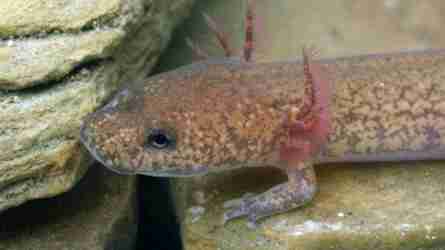 An animal like a larval salamander tracks the movements of small insects and crustaceans swimming around nearby. Using what it sees about how fast the prey is moving and in what direction it’s heading, the salamander can gauge when and where it should strike for its next meal. But any biological system has constraints—the salamander can process only so much visual information at once, so it makes trade-offs about which data are most important to help it catch its prey, and which data it can filter out. Using this “information bottleneck” problem as a starting point, the researchers developed a series of equations that show how organisms weigh different variables and calculate sensory inputs to make predictions about the future most efficiently.

“All biological systems are constrained. They don’t have infinite time, or infinite amounts of energy they can burn to do these calculations,” said Assoc. Prof. Stephanie Palmer, a neuroscientist at UChicago and senior author of the study published in PLOS Computational Biology. “We know predictions happen at many different time scales in many different organisms, with many different mechanisms. So, what we’re doing here is figuring out what the filtering or encoding should look like for a biological system trying its darndest to predict the future.”

The study, led by UChicago biophysics graduate student Vedant Sachdeva, is a collaboration with biophysicists Thierry Mora and Aleksandra Walczak from the French National Centre for Scientific Research, France. Vedant and colleagues studied how the visual system and adaptive immune system filter information to make predictions under the information bottleneck framework. They first used the movements of an oscillating weight attached to a spring and bouncing around in a viscous medium, inspired by previous work by Palmer on how the salamander retina responds to a visual stimulus moving around in the same manner. As expected, position and velocity are the most important variables to predict future movements, but how much each should be weighted depends on the movements themselves.

The researchers also considered other biological systems that rely less on short-term, adaptive processes like early vision does. Much of how an organism makes predictions in these different systems is hardwired evolutionarily, over time. Palmer said the team is working on taking what they’ve learned about how organisms make predictions and trying to understand how those systems adapt to new stimuli.