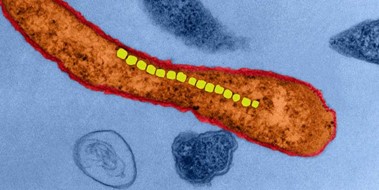 A bacterium of the genus Magnetospirillum. Thanks to a row of iron oxide crystals (light green), these bacteria orient themselves like a compass needle. Bacteria of this genus have been used in this study. (Photograph: Science Photo Library)

ETH scientists use magnetic bacteria to control liquids at the micro level. They are already thinking about using them in the human bloodstream for precision delivery of cancer drugs to a tumour.

Cancer drugs have side effects, so for many years, scientists have been exploring ways to transport the active substances to a tumour in the body as precisely as possible. That is the only place that drugs should take effect. One approach is to inject them into the bloodstream and control their transport in small vessels at tumour sites by locally altering the blood flow with tiny vehicles. Research laboratories have created microrobots whose shape and propulsion are inspired by bacteria and that are small enough to be inserted into blood vessels. These microvehicles can be powered from outside the body by a moving magnetic field.

Simone Schürle, Professor at the Department of Health Sciences and Technology, is now going one step further: instead of microrobots inspired by bacteria, she wants to use real bacteria that are magnetic. Researchers discovered such magnetotactic bacteria in the sea 45 years ago. These microorganisms absorb iron dissolved in the water; iron oxide crystals form in their interior and line up in a row. Like a compass needle, these bacteria align themselves with the Earth’s magnetic field so they can navigate in the water in a directed manner.

ETH Professor Schürle and her team investigated how to use a magnetic field to control these bacteria in the laboratory as a way to direct the flow of liquids in a controlled manner. In their experiments, they applied only relatively weak rotating magnetic fields to spin the bacteria along the desired directions. And with many bacteria in a swarm, it proved possible to move the fluid surrounding them. The bacteria produce an effect similar to that of a micropump, meaning they are able to move active substances present in the fluid in different directions, for example from the bloodstream into the tumour tissue. By using superimposed magnetic fields that locally reinforce or cancel each other out, this pumping activity can be confined to a small region with pinpoint accuracy, as Schürle’s team has been able to show in simulations.

Moreover, the principle can be put to work outside the body to mix different liquids locally with each other in very small vessels without having to manufacture and control mechanical micropumps.

Their work is primarily focused on investigating the approach and describing how the bacteria can control the flow. Before such bacteria can be used in the human body, their safety must first be investigated. However, bringing bacteria into the body for medical reasons is an approach that science is already pursuing under the term “living therapeutics”, albeit with other types of bacteria, such as E. coli.

It should also be possible to use non-​​natural bacteria for future medical applications. Synthetic biology can be used to construct bacteria that feature optimised functional properties and are safe for use in the human body, for example by not causing allergic reactions. Schürle can envisage treatments using bacteria that are killed before they are introduced into the body as well as treatments using living bacteria.

It has also been known for several decades that certain types of anaerobic bacteria (which do not require oxygen to grow) preferably accumulate in cancer patients’ tumours. In other words, these bacteria naturally prefer the low oxygen conditions in tumours over the rest of the body. While this was investigated in bacteria other than those used by Schürle’s team, synthetic biology could be used to combine the advantages of several bacterial species. This might lead to the development of bacteria that approach the tumour powered by their own flagella (whip-​​like appendages) and can then be precisely transported deep into the tumour tissue using external magnetic forces.