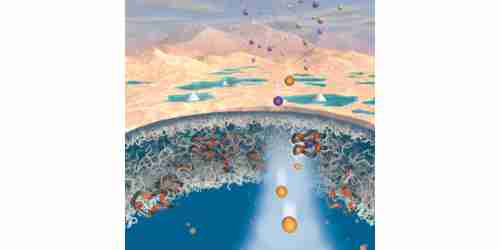 An interdisciplinary team of engineers and scientists is developing a way to extract lithium from contaminated water. New research, published this week in Proceedings of the National Academies of Sciences, could simplify the process of extracting lithium from aqueous brines, potentially create a much larger supply and reduce costs of the element for batteries to power electric vehicles, electronics and a wide range of other devices. Currently, lithium is most commonly sourced from salt brines in South America using solar evaporation, a costly process that can take years and loses much of the lithium along the way.

The research team from The University of Texas at Austin and University of California, Santa Barbara, designed membranes for precise separation of lithium over other ions, such as sodium, significantly improving the efficiency of gathering the coveted element. “The study’s findings have significant implications for addressing major resource constraints for lithium, with the potential to also extract it from water generated in oil and gas production for batteries,” said Benny Freeman, a professor in the McKetta Department of Chemical Engineering at UT Austin and a co-author on the paper.

Beyond salt brines, wastewater generated in oil and gas production also contains lithium but remains untapped today. Just a single week’s worth of water from hydraulic fracturing in Texas’ Eagle Ford Shale has the potential to produce enough lithium for 300 electric vehicle batteries or 1.7 million smartphones, the researchers said. This example shows the scale of opportunities for this new technique to vastly increase lithium supply and lower costs for devices that rely on it. At the heart of the discovery is a novel polymer membrane the researchers created using crown ethers, which are ligands with specific chemical functionality to bind certain ions. Crown ethers had not previously been applied or studied as integral parts of water treatment membranes, but they can target specific molecules in water — a key ingredient for lithium extraction. In most polymers, sodium travels through membranes faster than lithium. However, in these new materials, lithium travels faster than sodium, which is a common contaminant in lithium-containing brines. Through computer modeling, the team discovered why this was happening. Sodium ions bind with the crown ethers, slowing them down, while lithium ions remain unbound, enabling them to move more quickly through the polymer.