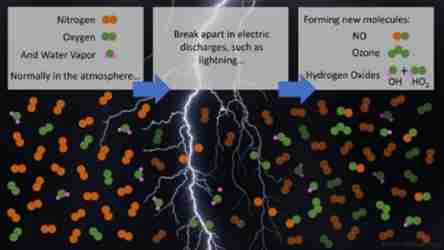 Lightning bolts break apart nitrogen and oxygen molecules in the atmosphere and create reactive chemicals that affect greenhouse gases. Now, a team of atmospheric chemists and lightning scientists have found that lightning bolts and, surprisingly, subvisible discharges that cannot be seen by cameras or the naked eye produce extreme amounts of the hydroxyl radical – OH - and hydroperoxyl radical - HO2. The hydroxyl radical is important in the atmosphere because it initiates chemical reactions and breaks down molecules like the greenhouse gas methane.  "Initially, we looked at these huge OH and HO2 signals found in the clouds and asked, what is wrong with our instrument?" said William H. Brune, distinguished professor of meteorology at Penn State. "We assumed there was noise in the instrument, so we removed the huge signals from the dataset and shelved them for later study." The data was from an instrument on a plane flown above Colorado and Oklahoma in 2012 looking at the chemical changes that thunderstorms and lightning make to the atmosphere. The research was published in Science First Release and the Journal of Geophysical Research - Atmospheres.

Brune notes that airplanes avoid flying through the rapidly rising cores of thunderstorms because it is dangerous, but can sample the anvil, the top portion of the cloud that spreads outward in the direction of the wind. Visible lightning happens in the part of the anvil near the thunderstorm core. It was known that lightning can split water to form hydroxyl and hydroperoxyl, but this process had never been observed before in thunderstorms. While the researchers found hydroxyl and hydroperoxyl in areas with subvisible lightning, they found little evidence of ozone and no evidence of nitric oxide, which requires visible lightning to form. If subvisible lightning occurs routinely, then the hydroxyl and hydroperoxyl these electrical events create need to be included in atmospheric models. Currently, they are not. According to the researchers, "Lightning-generated OH (hydroxyl) in all storms happening globally can be responsible for a highly uncertain but substantial 2% to 16% of global atmospheric OH oxidation." "These results are highly uncertain, partly because we do not know how these measurements apply to the rest of the globe," said Brune. "We only flew over Colorado and Oklahoma. Most thunderstorms are in the tropics. The whole structure of high plains storms is different than those in the tropics. Clearly we need more aircraft measurements to reduce this uncertainty."