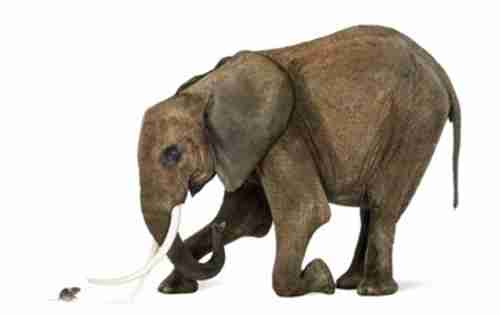 Mice and elephants have similar risks of getting cancer despite their size and lifespan differences.

Cancer is everywhere. If you or someone in your family hasn’t had it, you almost certainly know someone who did (or does). That’s why we think of it as largely a human problem, even though there’s a good chance you’ve had or known of a pet diagnosed with a type of cancer.

But what about other animals? Are they at risk of cancer as well? A large study published in Nature, December 2021 co-authored by a UC Santa Barbara researcher found that cancer is ubiquitous among mammals — although the risk of developing it varies widely.

Amy Boddy), a UCSB associate professor of anthropology and team leader in the Arizona Cancer and Evolution Center, said it’s important to understand these risks because it just might help humans in our long quest to develop effective therapies against cancer.

In other words, she said, “evolution has solved the problem of cancer over and over again, and can help guide us. By understanding cancer risk across species, we can uncover both the novel and the shared mechanisms of cancer protection across the tree of life. Novel cancer suppression mechanisms can potentially guide new therapeutic strategies.”

Boddy, who has a Ph.D. in molecular biology and genetics, and whose research focuses on evolution and human health, also noted that understanding which species are vulnerable to cancer is important from a conservation perspective.

“We are facing another mass extinction,” she said, “and we need to understand what animals are most vulnerable to all sorts of threats, including cancer, so more preventive measures can begin.”

The study analyzed data on 191 species and 110,148 individual mammals managed under human care in zoos and wildlife centers and found the risk of cancer is deeply uneven across orders. Carnivores, especially those that consume mammals, are much more likely to develop cancer than herbivores of the order Artiodactyla — even-toed ungulates like moose, giraffes, camels and, surprisingly, whales.

Boddy cautioned that the study does not prove a link between eating meat and cancer. The results, she said, “are correlational at best and do not really point to any mechanism,” and require follow-up studies.

“It’s also extremely important to note that this is a broad across-species observation of cancer rates and not intended to be interpreted within a species or at the individual level,” she said. “In other words, we cannot draw conclusions on these results about the human diet at this point.”

The study also addressed a curious evolutionary puzzle known as Peto’s paradox. Because tumors arise from mutations during cell division, larger and older animals — given their greater number of cell divisions — should have a higher risk of developing tumors. But that’s not necessarily true. Elephants and mice, for example, have roughly a similar likelihood of getting cancer, but their sizes and lifespans are radically different.

“All else being equal,” she said, “a body with more cells that lives a longer time should have an increased probability of seeing cancer-causing mutations arise. However, there must have been enhanced mechanisms that co-evolved with body size and lifespan to reduce this potential. In other words, we think large and long-lived animals have more robust cancer defense mechanisms. These findings not only confirm Peto’s paradox, but also suggest that understanding mechanisms of cancer defense in larger and long-lived species may uncover some really exciting new discoveries for cancer research.”

Boddy acknowledged that some critics of comparative oncology work suggest that using health records from managed populations of animals living in zoos has limitations because animals may live longer in zoos, unmasking a vulnerability to cancer that might not be seen in wildlife. But the study’s data, she said, holds up.

“I've worked with wildlife datasets,” she said, “and I can confirm wild animals are vulnerable to cancer as well, it is just more difficult to get large numbers needed to survey cancer risk across species. Using health records from zoo populations is a minor limitation to an otherwise amazing dataset, and this data is age-corrected to address some of these limitations. There is still a lot to learn about mechanisms and biological parameters of cancer risk across species — so it’s very exciting to see how this field will move forward.”