Large-scale liquid water existed on Mars much longer than suspected 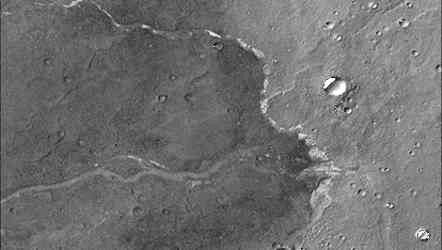 An analysis of large salt deposits on Mars indicates that ponds of liquid water existed on the Red Planet for about a billion years longer than previously believed.

Hundreds of deposits of sodium chloride (table salt) stretching tens to hundreds of square kilometers in area were discovered by NASA's Mars Odyssey orbiter starting in 2008. Not only did they offer evidence that Mars had been much wetter long ago, they also offered a way to determine the last time that water had existed in liquid form on the planet's surface.

"Salt is incredibly soluble, so any moisture at all would dissolve it. As such, these deposits must have formed during the evaporation of the last large-scale water on the planet," says Ellen Leask (PhD '20), lead author of a paper examining the deposits that was published by the journal AGU Advances on December 27. This work was part of Leask's doctoral studies at Caltech; she is now a postdoctoral scholar at Johns Hopkins University's Applied Physics Laboratory.

The discovery of the salt deposits presented two questions to scientists: how did the deposits form, and how old are they? To address those questions, Leask and Bethany Ehlmann, Caltech professor of planetary science, analyzed the salt deposits, looking at what types of landforms they formed on and how they were deposited across the terrain.

Using data from the Mars Reconnaissance Orbiter (MRO), Leask and Ehlmann conducted a broad study of all of the known salt deposits and found they are surprisingly thin—less than 3 meters thick—and occur in topographical lows.

"They don't fill basins like salt deposits in Death Valley," says Ehlmann, co-author of the paper. "The closest analogue we can find on Earth are chains of lakes that you get in Antarctica when snow melts seasonally atop permafrost. It cannot penetrate deep into the frozen ground below, so when water evaporates, the salt deposit left behind is thin."

The Martian salt deposits are often found in shallow depressions, sometimes perched above much larger craters that are devoid of the deposits. This orientation would seem to indicate the water came from surface runoff during a freeze thaw cycle of ice, with chloride for the salt leached from the top of clay-rich soils, according to the paper.

"This offers us new targets for future missions to Mars," Leask says. "Some of these deposits are on terrain that's a billion years younger than the ground the Perseverance Rover is rolling across right now, really extending our idea of when water last flowed across the Martian surface." Future missions could analyze the textures of the chlorides to confirm they are indeed the result of evaporation. The data could also reveal what organic compounds might have been associated with the water when it existed.