A kilonova occurs when two neutron stars — some of the densest objects in the universe — merge to create a blast 1,000 times brighter than a classical nova 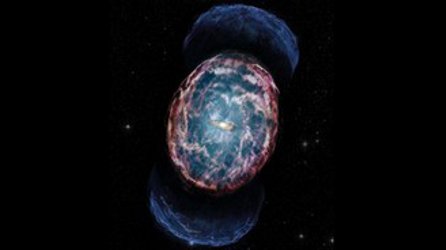 An artist’s conception illustrates the aftermath of a “kilonova,” a powerful event that happens when two neutron stars merge. Credit: NASA/CXC/M. Weiss

For the first time, Northwestern University-led astronomers may have detected an afterglow from a kilonova.

A kilonova occurs when two neutron stars — some of the densest objects in the universe — merge to create a blast 1,000 times brighter than a classical nova. In this case, a narrow, off-axis jet of high-energy particles accompanied the merger event, dubbed GW170817. Three-and-a-half years after the merger, the jet faded away, revealing a new source of mysterious X-rays.

As the leading explanation for the new X-ray source, astrophysicists believe expanding debris from the merger generated a shock — similar to the sonic boom from a supersonic plane. This shock then heated surrounding materials, which generated X-ray emissions, known as a kilonova afterglow. An alternative explanation is materials falling toward a black hole — formed as a result of the neutron star merger — caused the X-rays.

Either scenario would be a first for the field. The study was published today (Feb. 28), in The Astrophysical Journal Letters.

"We have entered uncharted territory here in studying the aftermath of a neutron star merger," said Northwestern’s Aprajita Hajela, who led the new study. “We are looking at something new and extraordinary for the very first time. This gives us an opportunity to study and understand new physical processes, which have not before been observed.”

Hajela is a graduate student at Northwestern’s Center for Interdisciplinary Exploration and Research in Astrophysics (CIERA) and in the Department of Physics and Astronomy in the Weinberg College of Arts and Sciences.

On Aug. 17, 2017, GW170817 made history as the first neutron-star merger detected by both gravitational waves and electromagnetic radiation (or light). Since then, astronomers have been using telescopes around the world and in space to study the event across the electromagnetic spectrum.

Using NASA’s Chandra X-ray Observatory, astronomers observed X-ray emissions from a jet moving very close to the speed of light produced by the neutron star merger. Starting in early 2018, the jet’s X-ray emission steadily faded as the jet continued to slow and expand. Hajela and her team then noticed from March 2020 until the end of 2020, the decline in brightness stopped, and the X-ray emission was approximately constant in brightness.

This was a significant clue.

"The fact that the X-rays stopped fading quickly was our best evidence yet that something in addition to a jet isbeing detected in X-rays in this source,” said Raffaella Margutti, astrophysicist at the University of California at Berkeley and a senior author of the study. “A completely different source of X-rays appears to be needed to explain what we’re seeing."

The researchers believe a kilonova afterglow or black hole are likely behind the X-rays. Neither scenario has ever before been observed.

To distinguish between the two explanations, astronomers will keep monitoring GW170817 in X-rays and radio waves. If it is a kilonova afterglow, the X-ray and radio emissions are expected to get brighter over the next few months or years. If the explanation involves matter falling onto a newly formed black hole, then the X-ray output should stay steady or decline rapidly, and no radio emission will be detected over time.

“Further study of GW170817 could have far-reaching implications,” said study co-author Kate Alexander, a CIERA postdoctoral fellow at Northwestern. “The detection of a kilonova afterglow would imply that the merger did not immediately produce a black hole. Alternatively, this object may offer astronomers a chance to study how matter falls onto a black hole a few years after its birth.”