A new study finds that a solitary lifestyle has profound effects on the brains of a social insect: paper wasps 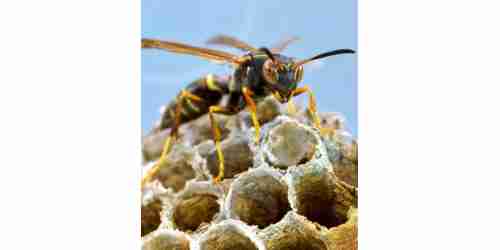 Polistes fuscatus paper wasp on a nest. These wasps and their relatives commonly make nests under the eaves of buildings each spring and live complex social lives full of cooperation and conflict. Each cell of their paper nests holds a larva

Just as humans are challenged from the social isolation caused by the coronavirus pandemic, a new study finds that a solitary lifestyle has profound effects on the brains of a social insect: paper wasps.

Paper wasps (Polistes fuscatus) recognize the brightly colored faces of other paper wasps, an ability they lose when reared in isolation. The wasps’ ability to remember faces is similar to primates and humans, but unlike other social insects.

The study revealed that when adult wasps are housed in solitude, visual areas of their brains – especially those involved with identifying nuanced color patterns and shapes – are smaller and less developed than their peers who lived with other wasps.

“The wasps provide us with a simple insect brain that offers a system for understanding the basic constructs of how neural circuits work and how social interactions shaped the brain,” said Michael Sheehan, the Nancy and Peter Meinig Family Investigator in the Life Sciences, and assistant professor in the Department of Neurobiology and Behavior in the College of Agriculture and Life Sciences.

“To my knowledge, this is the first empirical study to propose a candidate brain region in an insect that is involved with individual identity processing,” said first author Christopher Jernigan, a postdoctoral researcher in Sheehan’s lab.

These paper wasps, native to the eastern United States, live in smaller colonies (up to a few hundred individuals) than honeybees (tens of thousands). Also, unlike honeybees whose hives have a single queen, paper wasps can have multiple queens. When starting nests each spring, these future queens can form small groups that collaborate on labor. Still, colonies have social hierarchies and competition. The dominant queen monopolizes egg-laying and subordinate queens do most of the work. Subordinates may leaving the nest to join another or start their own colony if they feel the arrangement isn’t fair.

“There’s tension of balancing conflicts among the cooperating queens,” Sheehan said, “and that seems to be the thing that has favored individuals to recognize each other, to know who’s who, how work is being divided up, whether they are getting their fair share. It seems to help to manage conflicts.”

Sheehan’s previous research has shown how well and quickly the wasps recognize faces as well as simple shapes and color patterns. A recent University of Michigan study also revealed that these wasps lose their ability to recognize faces when raised in isolation, as opposed to being nest-reared.

This study further tests the effects of maturation and social experience on the wasps’ brain development, with a focus on regions involved in visual and olfactory processing, as paper wasps also sense individuals through smells and chemical communication.

Caterpillar-like P. fuscatus larvae live in individual cells within the nest, and though they can detect chemicals and light, their visual areas are undeveloped. As the nascent wasps emerged from their cocoons, the researchers separated them from the colony. Some of them were isolated in containers, while others were placed in identical containers with other wasps. The researchers also examined the brains of a few of these newly-emerged wasps to get baseline measurements, prior to any adult experiences.

After two months, they measured the mature wasps’ brains. Their brains, regardless of social experience, increased in volume as they aged, which is common across insects. Also, while the volumes of olfactory areas did not change, the researchers did find that an area involved in visual color processing, the anterior optic tubercle, had grown relative to the wasp’s higher processing region, the closest thing to a cortex in insects, called the mushroom body.

The study opens the door for further research to understand the specific role that the anterior optic tubercle might play in facial processing in paper wasps, and invites comparisons with socially responsive brain circuits in primates, Jernigan said.

Natalie Zaba ’20, a former Sheehan lab member, is a co-author of the paper.