To better understand what happens once asbestos enters a human body, researchers took a nanoscale look at the mineral. 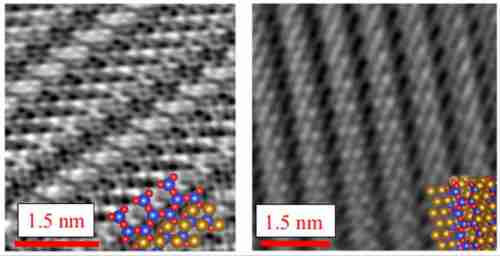 Two images show the structure of amphibole asbestos before (left) and after (right) interaction with lung cells in culture. (Image: Scientific Reports, modified by Ruggero Vigliaturo, used under https://creativecommons.org/licenses/by/4.0/)

A common building material, asbestos is the term used to describe a range of naturally growing minerals. Serious diseases, including mesothelioma and lung cancer, can arise decades after coming into contact with asbestos.

Biomedical researchers have spent many years trying to understand how asbestos causes disease, though multiple pieces of the puzzle remain unknown. Taking a completely different approach, an international team led by researchers at the University of Pennsylvania, looked instead at how the interactions change the mineral itself.

“Many studies have looked at the toxicity of asbestos, and we wanted to approach this issue from the opposite side, not investigating the effects on the cells, but rather exploring what happens to the mineral once inside the cell,” says Reto Gieré, a professor in Penn’s Department of Earth and Environmental Science in the School of Arts & Sciences, and senior author on the work, published in Scientific Reports.

“We used cutting-edge experimental techniques, going down to the nanoscale and even the atomic scale to see the transformation of the minerals,” says first author Ruggero Vigliaturo, now a tenure-track assistant professor at Italy’s University of Turin who completed the research during a postdoctoral fellowship at Penn. “What we saw is that the minerals are undergoing changes that almost look like they’re defending themselves from the cells.”

The research grew out of a larger set of experiments on asbestos undertaken through Penn’s Center of Excellence in Environmental Toxicology. Though a common term, the word “asbestos” is not a scientific one, but rather is used in industry to refer to a wide range of minerals with varying structures and chemical compositions. In the current work, Vigliaturo, Gieré, and colleagues focused on amphibole asbestos, which is hypothesized to be more hazardous than other varieties.

While much research into asbestos toxicity has focused on how the body’s tissues respond to the mineral, here the researchers wanted to observe how the mineral responded to being taken up by human lung cells. Collaborating with researchers at the National Institute of Chemistry in Slovenia, Vigliaturo and Gieré made use of imaging technology with an extremely high-spatial resolution to characterize the minerals after two days spent inside human lung cells. In contrast, most asbestos research has so far focused on impacts on the body when long asbestos fibers remain in areas of tissue outside of cells.

With specialized transmission electron microscopy (TEM) techniques, the researchers documented never-before-seen changes in the amphibole minerals, many of which were taken up by compartments in the cell called lysosomes, which typically are involved in processing cellular waste and programmed cell death.

“In these lysosomes, which are more acidic than the rest of the cell, we observed that the surface of the mineral starts dissolving,” says Gieré.

An immediate question about these relatively iron-rich minerals quickly arose: “What was the fate of the iron?”

A refined type of TEM analysis allowed the researchers to see that the oxidation state of iron was changing during this dissolution, alterations that could influence the way the mineral reacted with other cellular components, such as organelles and cell nuclei.

The mineral surfaces also underwent striking changes, which included the formation of an iron-rich, amorphous layer after being internalized by the cells. To the scientists, the layer was reminiscent of asbestos bodies, but with marked structural and chemical differences. Asbestos bodies are formed by macrophages in the lung tissue rather than inside the cells, and are associated with extended exposure to asbestos.

“When you examine samples of lung tissue extracted from patients that succumbed to asbestos-related diseases, you’ll find asbestos fibers surrounded by a brownish coating. These are asbestos bodies,” Gieré says. “The coating is biogenically formed, and the iron is delivered primarily from the body through a protein called ferritin.”

“Why this happens, we don’t know,” Gieré says. “It may be the cell is attempting to protect itself by triggering this change in the mineral but it’s too early to say.”

In addition, Vigliaturo notes that the more iron-rich amphiboles unexpectedly showed less pronounced dissolution and a less extensive amorphous layer than the varieties that contained less iron. “This was the opposite of what we anticipated and what was reported in abiotic experiments,” he says.

The mineralogic changes, the researchers say, could impact how the body responds and deals with the asbestos fibers—a process that may have links to how disease arises decades later. They caution, however, that their experiments were carried out over a short time frame, just two days, and conducted in vitro with cell lines rather than within the human body. More work is necessary, they say, to understand whether what they observe is reflected in living people exposed to asbestos.

Gieré, Vigliaturo, and their colleagues continue to explore the interaction of lung cells and asbestos, but with a focus on the biochemical changes in the cells themselves. They’re also experimenting with different types of asbestos to better understand how their similarities and differences may relate to disease burden.

They hope that their findings will help other researchers interpret the toxic and carcinogenic effects of asbestos. And for Vigliaturo, who was born in Casale Monferrato, Italy, a city of 40,000 people with more than 3,000 deaths attributed to asbestos toxicity from a local factory, the desire to learn more about asbestos-related disease is personal.

“We took nanoscience, biology, and nanomaterials technology and brought it to mineralogy,” he says. “We’re using our specialized backgrounds to contribute to solving this part of the puzzle.”