Researchers observed two CMEs arising from a circular ribbon structure on the Sun and followed it with data from Atmospheric Imaging Assembly (AIA). 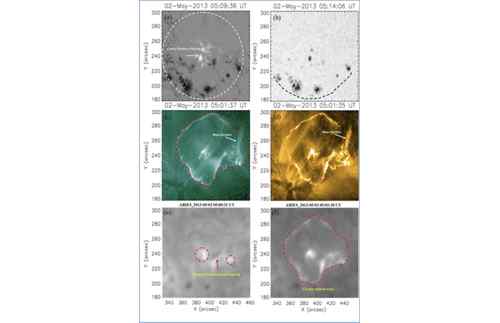 A team of astronomers have found that interactions between two different Coronal Mass Ejections (CMEs) in the interplanetary medium as they travel towards the Earth play a key role in their evolution. Coronal Mass Ejections (CMEs) and flares are the largest eruptive phenomena in our solar system. Flares are characterized by a sudden catastrophic release of energy in the solar atmosphere. A huge amount of energy is released within a few minutes at the time of flare eruption. After the successful eruption of the solar flare, we can see the CME from the same region, which then travels outwards. When such a CME hits the Earth, it can cause damage to satellites as well as disruptions to our communication systems. Hence, predicting the evolution of CMEs has become important in recent years.

Researchers from the Indian Institute of Astrophysics, an autonomous institute of the Department of Science & Technology, Govt. of India and their collaborators observed two such CMEs on 2013-May-02 and 2014-Feb-16 arising from a circular ribbon structure on the Sun and followed it with data from Atmospheric Imaging Assembly (AIA). They used data from Large Angle and Spectrometric COronagraph (LASCO), Solar Terrestrial Relations Observatory (STEREO), and Ames Coronagraph Experiment (ACE) Laboratory observations. This paper has been published recently in the ‘Research in Astronomy and Astrophysics/IOP’.

The scientists found that the location of the CME in the solar disk is an important factor that decides its trajectory in the corona and subsequent evolution in the inter-planetary medium. Also, this eruption is highly deflected from the source region. After the main explosion, a huge part of the CME moved towards the north-east direction of the Sun. Finally, only a small part of the CME propagates towards the Earth. This erupted CME seems to be interacting with two previous CMEs near Sun. This is very likely due to this interaction; this CME might have lost a substantial part of its energy. Their analysis suggests that this CME became dissipated in the interplanetary space. After travelling a certain distance, this CME associated Interplanetary CME, or ICME, mingled with the solar wind.

“Our study demonstrates that the CME deflection and CME-CME interactions were the major reasons affecting propagation in the Interplanetary medium. We plan to analyze the CME observations of a series of circular ribbon eruptive flares in the future”, says Syed Ibrahim, the lead author of the paper.