Engineers have discovered that increasing the temperature of cartilage in the knee during physical exertion could prevent the cartilage from degenerating. 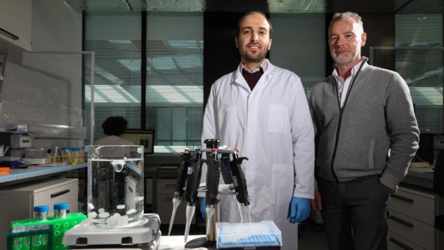 "There is currently no treatment for knee arthritis; we can offer only palliative care to reduce the symptoms,” says Prof. Dominique Pioletti, head of the Laboratory of Biomechanical Orthopedics within EPFL’s School of Engineering. Pioletti has spent many years studying cartilage-related problems. He and Naser Nasrollahzadeh, who completed his PhD on the subject, recently demonstrated that it may be possible to slow or even prevent the early signs of arthritis by applying heat directly to the knee during physiotherapy sessions. This discovery is the result of over eight years of research and three thesis projects. These most recent findings have been published in eLife.1

Cartilage works as a shock absorber between the bones in our joints. Over time, cartilage in the knee loses its ability to dissipate shocks. “The factors that trigger arthritis are not yet fully understood, but once the cartilage degeneration process begins, it can’t be reversed and eventually leads to pain in the injured knee,” says Pioletti. “We wanted to examine how cartilage functions from a biomechanical standpoint, so that we could identify ways to protect tissue cells from shocks and restore the initial properties of the damaged cartilage.” 2

In their research, the engineers found that combining a temperature increase with mechanical stimulation to the cartilage promotes the production of cellular tissue and preserves the integrity of the cartilage. “Cartilage does not contain blood vessels and therefore has a tendency to retain heat when we walk or run,” says Pioletti. As heat accumulates in the cartilage, the temperature rises from 32°C when the knee is at rest to 37°C after physical exercise.

The PhD students working in Pioletti’s lab volunteered to serve as guinea pigs for the initial experiments. Their knees were scanned at rest, and then again after climbing eight flights of stairs. The results showed that the temperature of cartilage increases when it is subjected to stress.3

The engineers then attempted to reproduce these findings in the lab. “We wanted to see what happens to cartilage cells when a temperature rise occurs in tandem with physical activity,” says Pioletti. He and his team developed a bioreactor into which they placed samples containing cartilage cells obtained from in vitrocultures. They applied a mechanical charge to the samples and controlled the temperature increase within the machine. “Once the mechanical and thermal effects were combined, we saw that cartilage cells tended to express higher quantities of genes related to cartilage maintenance,” says Pioletti.

The engineers’ discovery could provide hope for people suffering from early arthritis. When cartilage begins to degenerate, it loses its ability to accumulate heat, which prevents the temperature of the tissue to rise. And without an increase in temperature, the cartilage cells no longer function optimally. "It's a vicious cycle,” says Pioletti. “Once it’s kicked off, it can’t be stopped and the cartilage keeps degenerating. However, if we manage to heat the cartilage through physical exertion, we could stimulate the cells to produce cartilage tissue again and eventually reverse the progression of cartilage degeneration." Within the next three years, the engineers should be able to confirm whether there is a link between cartilage formation, temperature and mechanical loading. They plan to test a combination of physical therapy and local heating of the knee on patients with early arthritis.

The engineers at Pioletti’s lab decided not to employ animal testing in their experiments. “Using animals wouldn’t have been viable for our study, mainly because animals have a different body temperature than humans,” says Pioletti. The next step will be to examine the qualitative evolution of cartilage in patients who have undergone the new physiotherapeutic treatment.