Specialized printing, fabrication could carve out niche in ‘e-clothing’ for athletics, healthcare 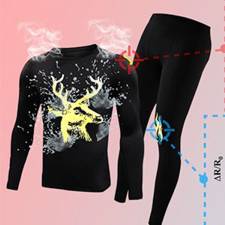 Scientists at Case Western Reserve University have developed an inexpensive way to transform an ordinary shirt into an electronic smart shirt—one able to monitor and adjust body temperature or even allow the wearer to apply heat to a sore shoulder or back.

All from a design printed on the fabric of the shirt or any other piece of clothing.

The key to their innovation: A highly conductive ink and simple screen-printing process. The new method results in a waterproof, breathable and highly flexible design that can function as a heating element when powered by a coin-sized battery.

The wearable tech market, such as the FitBit, Apple watch and Bluetooth headset, is surging, according to market analysts. But an increasing segment includes electronic technology embedded in clothing, implanted in the user’s body, or even tattooed on the skin.

The Case Western Reserve-led team of researchers believes its method stands out in the expanding wearable tech market for its simplicity, durability, comfort—and eventually someday price.

They say their process, successful in laboratory testing, could someday be applied to mass production. The research team, which included collaborators in Wuhan, China, published its findings in the journal Small.

“We believe this is a far better method than other attempts to make truly wearable technology because is not only has good performance initially, but is durable long term,” said Changyong (Chase) Cao, an assistant professor of mechanical and aerospace engineering and at the Case School of Engineering, who led the research.

Cao is also director of the Laboratory for Soft Machines and Electronics at Case Western Reserve. He said most available designs to incorporate electronics into clothing have been with a polymer or elastomer surface. Those kinds of surfaces are often uncomfortable and not breathable.

The difference: conductive and durable ink

Other researchers have tried two other ways to integrate electronic fibers into fabric. Some have tried spinning them into the material or by depositing conductive materials onto the cloth surface, Cao said. The latter, such as spray-coating and dip-coating, is more common because it is faster and less expensive, he said.

“Our new method improves on those by using the low-cost screen-print method to achieve a higher resolution level,” he said. “That enables us to print the ink into more aesthetic patterns, or complex designs. The printed e-textiles are very stretchable and can keep working well even after multiple washings.”

The key, researchers said, was the use of silver fractal dendrites—microscopic, branch-like filaments of silver. The filaments conduct electricity well—even if manipulated or deformed while in use.

The team added the microscopic solid metals to a water-based ink. They bound the metals to the ink’s molecules with a clear and highly elastic adhesive.

The researchers then covered the ink with a thin layer of an invisible waterproofing agent that prevents the electrodes from cracking. Then they printed it onto a fabric.

The ink then functions as a conductor of small amounts of electricity. TI can detect body motions and perform personalized temperature management or control.

The researchers used a small coin battery, or button cell, like those found in thermometers, car key fobs or wristwatches to power the ink-based heating unit.