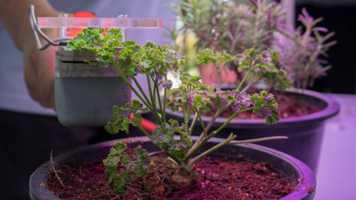 “Artificial photosynthesis is the holy grail of all chemists,” says Astrid Olaya, a chemical engineer at EPFL’s Institute of Chemical Sciences and Engineering (ISIC). “The goal is to capture sunlight, on the one hand to oxidize water to generate oxygen and protons, and on the other to reduce either protons to hydrogen or CO2 to chemicals and fuels. This is the essence of a circular chemical industry.”

With global energy demands increasing, we are in need of viable alternatives to fossil fuels, whose negative environmental impact has also become all too apparent. One of those alternatives is hydrogen, which can be consumed in simple fuel cells for energy, leaving behind only water.

A method for producing hydrogen is “water splitting”, where molecules of water are broken into molecular hydrogen and oxygen. In artificial photosynthesis, light is absorbed to generate the energy needed to break up water molecules.

The classical design of an artificial photosynthesis device is relatively straightforward: a light-absorbing dye called the antenna, coupled with a semiconductor that separates the electrical charges (anode and cathode), and an electrocatalyst that drives the water reduction-oxidation reaction.

However, the process remains too slow. Water oxidation with visible light (e.g. sunlight) is still a bottleneck for artificial photosynthesis, hindering large-scale development despite more than half a century of research. “The problem is that it’s hard to find electrode materials with high chemical stability, suitable optoelectronic properties, and high catalytic efficiency,” says Olaya.

Working at the lab of Hubert Girault at EPFL, Olaya has led a study that provides a new approach to artificial photosynthesis. The work has been published of the Journal of theAmerican Chemical Society Gold (JACS Au).

“In this study, we photo-oxidized water with a simple organic molecule, namely tetrathiafulvalene (TTF),” says Olaya. “It has been shown that a salt version of TTF can self-assemble into microrods that act as antennas to capture the visible light and as electron pumps to oxidize water to oxygen.” Usually, this is a slow, multistep reaction but the stack of TTF salt molecules can capture the four electrons needed to oxidize a molecule of water.

The researchers also used water in an oil emulsion. “The TTF antenna can reside in the oil phase close to the water phase, where the protons produced from water oxidation are extracted,” says Olaya. “As in natural photosynthesis, the biphasic system allows an efficient separation of the reactants and products.”

TTF is made up only of carbon, sulfur and hydrogen atoms, which are all widely available. That means that the new method is also cost effective and sustainable, since it doesn’t require any precious metal ions, such as platinum or iridium. “This work is a new way of approaching artificial photosynthesis with just a few simple organic molecules,” says Olaya.

Source: Based on EPFL news release written by Nik Papageorgiou