This research promises to accelerate the use of silicon technology as a viable alternative to other quantum computing technologies, such as superconductors or trapped ions 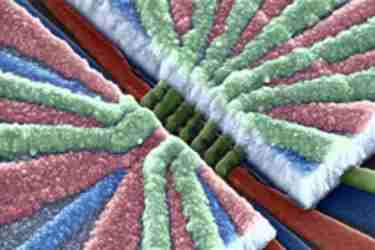 In research published in the journal Science Advances, Princeton physicists used a two-qubit silicon quantum device to achieve an unprecedented level of fidelity. At above 99 percent, this is the highest fidelity thus far achieved for a two-qubit gate in a semiconductor and is on par with the best results achieved by competing technologies. Fidelity, which is a measure of a qubit’s ability to perform error-free operations, is a key feature in the quest to develop practical and efficient quantum computing.

Researchers around the world are trying to figure out which technologies — such as superconducting qubits, trapped ions or silicon spin qubits, for example — can best be employed as the basic units of quantum computing. And, equally significant, researchers are exploring which technologies will have the ability to scale up most efficiently for commercial use.

“Silicon spin qubits are gaining momentum [in the field],” said Adam Mills, a graduate student in the Department of Physics at Princeton University and the lead author of the recently published study. “It’s looking like a big year for silicon overall.”

By using a silicon device called a double quantum dot, the Princeton researchers were able to capture two electrons and force them to interact. The spin state of each electron can be used as a qubit and the interaction between the electrons can entangle these qubits. This operation is crucial for quantum computation. The research team, led by Jason Petta, the Eugene Higgins Professor of Physics at Princeton, performed this entangling operation at a fidelity level exceeding 99.8 percent.

A qubit, in simplest terms, is a quantum version of a computer bit, which is the smallest unit of data in a computer. Like its classical counterpart, the qubit is encoded with information that can have the value of either one or zero. But unlike the bit, the qubit is able to exploit the concepts of quantum mechanics so that it can perform tasks classical bits cannot.

“In a qubit you can encode zeros and ones, but you can also have superpositions of these zeros and ones,” said Mills. This means that each qubit can be simultaneously a zero and a one. This concept, called superposition, is a fundamental quality of quantum mechanics and one that allows qubits to do operations that seem amazing and otherworldly. In practical terms, it allows the quantum computer a greater advantage over conventional computers in, for example, factoring very large numbers or isolating the most optimal solution to a problem.

The “spin” in spin qubits is the electron’s angular momentum. It is a quantum property that manifests as a tiny magnetic dipole that can be used to encode information. A classical analogue is a compass needle, which has north and south poles, and rotates to align with Earth’s magnetic field. Quantum mechanically, the spin of the electron can align with the magnetic field generated in the lab (spin-up), or be oriented anti-parallel to the field (spin-down), or be in a quantum superposition of spin-up and spin-down. Spin is the property of the electron harnessed in silicon-based quantum devices; conventional computers, by contrast, work by manipulating an electron’s negative charge.

Mills asserted that, in general, silicon spin qubits have advantages over other qubit types. “The idea is that every system is going to have to scale up to many qubits,” he said. “And right now, the other qubit systems have real physical limitations to scalability. Size could be a real problem with these systems. There’s only so much space you can cram these things into.”

In comparison, silicon spin qubits are made from single electrons and are extremely small.

“Our devices are just about 100 nanometers across, while a conventional superconducting qubit is more like 300 microns across, so if you want to make many on a chip, it’s going to be difficult using a superconducting approach,” Petta said.

The other advantage of silicon spin qubits, Petta added, is that conventional electronics today are based on silicon technology. “Our feeling is that if you really want to make a million or ten million qubits that are going to be required to do something practical, that’s only going to happen in a solid-state system that can be scaled using the standard semiconductor fabrication industry.”

Still, operating spin qubits — like other types of qubits — with a high fidelity has been a challenge for researchers.

“One of the bottlenecks for the technology of spin qubits is that the two-qubit gate fidelity up until very recently has not been that high,” Petta said. “It’s been well below 90 percent in most experiments.”

But it was a challenge that Petta and Mills and the research team believed could be achieved.

To perform the experiment, the researchers first had to capture a single electron — no small task.

“We’re trapping a single electron, a very small particle, and we need to get it into a specific region of space and then make it dance,” said Petta.

To do this, Mills, Petta and their colleagues needed to construct a “cage.” This took the form of a wafer-thin semiconductor made primarily out of silicon. To the top of this the team patterned little electrodes, which creates the electrostatic potential used to corral the electron. Two of these cages put together, each separated by a barrier, or gate, constituted the double quantum dot.

“We have two spins sitting in adjacent sites next to each other,” said Petta. “By adjusting the voltage on these gates, we can momentarily push the electrons together and cause them to interact. This is called a two-qubit gate.”

The interaction causes each spin qubit to evolve according to the state of its neighboring spin qubits, which leads to entanglement in quantum systems. The researchers were able to perform this two-qubit interaction with a fidelity exceeding 99 percent. To date, this is the highest fidelity for a two-qubit gate that has thus far been achieved in spin qubits.

Petta said that the results of this experiment place this technology — silicon spin qubits — on an equal footing with the best results achieved by the other major competing technologies. “This technology is on a strongly increasing slope,” he said, “and I think it’s just a matter of time before it overtakes the superconducting systems.”

“Another important aspect of this paper,” Petta added, “is that it’s not just a demonstration of a high fidelity two-qubit gate, but this device does it all. This is the first demonstration of a semiconductor spin qubit system where we have integrated performance of the entire system — the state preparation, the read out, the single qubit control, the two-qubit control — all with performance metrics that exceed the threshold you need to make a larger-scale system work.”

Thaddeus Ladd, a research scientist with a specialty in quantum information systems from HRL Laboratories, and who was not involved in the study, commented, “This result from Adam Mills and coworkers shows many capabilities coming together at once for Si/SiGe qubits, adding to a growing set of worldwide evidence that this qubit type has the ability to go far in reaching the eventual goal of a quantum computer.”

In addition to Mills and Petta, the work also included the efforts of Princeton graduate students Charles Guinn and Mayer Feldman, as well as University of Pennsylvania assistant professor of electrical engineering Anthony Sigillito. Also contributing to the paper and research were Michael Gullans, Department of Physics, Princeton University and the Center for Quantum Information and Computer Science at NIST/University of Maryland and Erik Nielsen of the Sandia National Laboratories, Albuquerque, New Mexico.