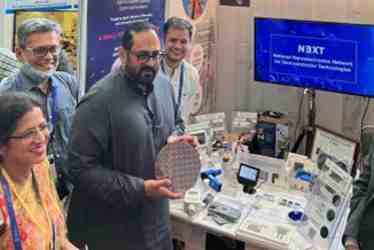 IIT Bombay showcased indigenous technology development in the inaugural session of the 'SemiconIndia 2022' Conference that was conducted by the India Semiconductor Mission in collaboration with industries and industry organizations. Hon'ble Prime Minister Shri Narendra Modi inaugurated the event. The conference's theme this year was "Catalyzing India's Semiconductor Ecosystem."

Innovation is a critical component for ecosystem catalysis. Translation of technologies from R&D labs to manufacturing, powers the global ecosystem. India has developed academic R&D in semiconductors through the Centers of Excellence in Nanoelectronics (CENs), where IIT Bombay is a pioneering institution.

A key deliverable of the semiconductor ecosystem building led by the Minister is to establish Silicon manufacturing and innovation ecosystem. Hence, the first indigenous memory developed on a 180 nm CMOS technology platform was of significant interest to the MoS. The MoS showcased the 8-inch wafer containing the pioneering one time programmable (OTP) memory translated from IITB Lab to SCL Fab for productization.

What is One Time Programmable (OTP) memory? Researchers at IIT Bombay led by Prof. Udayan Ganguly invented a "memory technology" that has the potential to revolutionize the indigenous semiconductor product landscape by providing a secure memory and hardware encryption. Unlike the ubiquitous Flash memories which are rewritable, some secure memories require that the information once written is never tampered with. The one-time programmable memory (OTP) is written once, stored for a lifetime, and read multiple times.

How does the technology work? The researchers utilized eight memory cells, each of which could store one "bit" of the corrected value (that is a value of zero or one). Each memory cell is made up of a layer of silicon dioxide that is only a few atomic layers thick. This is deposited uniformly over an 8-inch silicon wafer (the size of a dinner plate) to create millions of nanoscale capacitors. The pristine silicon dioxide layer is insulating, passing very little current [which is read as a "0" in digital electronics]. The capacitor is blown by nanoscale lightning caused by a low 3.3 volts, resulting in a short circuit and high current [this is a "1"]. Throughout its lifespan, the OTP memory recalls either the "0" or "1" state it was programmed to.

This is a pioneering indigenous technology by a multi-agency team. It is the first indigenous semiconductor memory technology to be manufactured at the 180-nanometer node - a national milestone for semiconductor technology development. The original technology was based on know-how at IIT Bombay contained in a PhD thesis. It was jointly transferred to manufacturing through a collaboration between teams of IIT Bombay and SCL Chandigarh. The memory development is supported by MeitY while the Hardware Encryption Technology is supported by DST. The translation of hardware encryption to products is funded and managed by O/o PSA with partnership with DRDO, SETS Chennai and IIT Delhi.

OTP Memory has Widespread Utility. There are various uses of the OTP memory.

1. Chip Calibration: Consider a thermometer chip that measures temperature. The chip may read 100 degrees Celsius as 101 degrees Celsius due to a tiny manufacturing error. By putting the error correction parameter in the OTP memory, this 1 degree "offset" can be fixed. This is done once for each chip, and the memory corrects the chip's output for the rest of its life.

3. Hardware Encryption for IoT Devices: The OTP memory delivers a unique fingerprint of a chip (known as Physical Unclonable Function). It is used for Trusted Platform Management and other IoT and Human ID security with applications in credit cards, SIMS cards etc.

The total market size for various applications is around 100M$ (750 Crores INR) per year. A startup Numelo Technologies has been incubated to accelerate commercialization.