Five outstanding scientists and engineers have been selected to receive the Distinguished Alumni Awards of the Indian Institute of Science (IISc) for the year 2022. 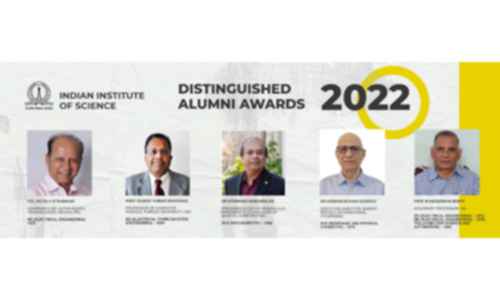 Five outstanding scientists and engineers have been selected to receive the Distinguished Alumni Awards of the Indian Institute of Science (IISc) for the year 2022.

The annual awards recognise exceptional contributions made by IISc alumni/ae to their profession, society and the Institute. The nominations received are evaluated by a committee chaired by the Director, IISc.

Prof Bharat Kumar Bhargava is a Professor of Computer Science at Purdue University, USA. He has made pioneering contributions to cyber security, applied machine learning, and autonomous systems. One of the applications he has developed, for example, is a system to assist visually challenged people in navigating their environment and in social interactions, using mobile phones and cloud computing. He has also mentored a large number of students from underrepresented backgrounds. Prof Bhargava completed his BE degree from the Department of Electrical Communication Engineering in 1969.

Col (Retd) HS Shankar is currently the Chairman and Managing Director of Alpha Design Technologies Private Limited, Bengaluru. He has served in various field and operational units as well as in prestigious appointments in the army until his voluntary retirement in 1986. He received the Vishisht Seva Medal from the President of India for his distinguished service. He also served as the Director (R&D) at Bharat Electronics Limited (BEL), where he spearheaded several indigenous R&D projects, before establishing Alpha Design Technologies, which is among the fastest growing defense R&D and manufacturing firms in India. He completed his ME from the Department of Electrical Engineering in 1973.

Dr Krishna Mohan Vadrevu is Executive Director at Bharat Biotech International Limited. He is known for his contributions to the development of indigenous vaccines for infectious diseases, including a typhoid conjugate vaccine, a novel low-dose rotavirus vaccine, and Covaxin, which was developed during the COVID-19 pandemic. He has demonstrated effective leadership in managing teams of highly qualified scientists and engineers from different disciplines, and in taking new ideas and products from the lab to the market. Dr Vadrevu completed his PhD from the Department of Inorganic and Physical Chemistry in 1976.

Dr Krishnan Nandabalan is President and CEO of InveniAI LLC, and President and Co-founder of BioXcel Corporation. A successful entrepreneur, he has over two decades of experience in the pharmaceutical and biotechnology industries. He has established an AI-based technology platform to uncover novel biological connections from published scientific data in order to develop affordable treatments for diseases. The company he co-founded, BioXcel Therapeutics (NASDAQ-listed), is developing a drug candidate to treat aggressive forms of prostate cancer and advanced solid tumours that are refractory or treatment naïve to checkpoint inhibitors. Dr Nandabalan completed his PhD from the Department of Biochemistry in 1990.

Prof M Narasimha Murty is currently an Honorary Professor at IISc. He has made pioneering contributions to computer science, especially in the area of pattern recognition, with his publications having garnered a large number of citations. His contributions include a first-of-its-kind divide-and-conquer framework for clustering large datasets and a novel genetic K-Means algorithm. He has also been an exceptional mentor for Master’s and PhD students, and has served in several leadership positions at IISc. Prof Murty completed his BE and ME from the Department of Electrical Engineering in 1975 and 1978, and his PhD from the Department of Computer Science and Automation in 1982.

“We are delighted to confer this year’s Distinguished Alumni Awards upon five outstanding graduates of the Institute,” says Prof Govindan Rangarajan, Director, IISc. “We are extremely proud of the exceptional contributions made by the awardees to science and engineering, and to society. We hope that their accomplishments serve as an inspiration for young researchers to pursue excellence in their respective fields.”

The awardees will be honoured at an event to be held in December 2022, during which awardees from the years 2020 and 2021 will also be recognised.