Researchers have found evidence of high-energy neutrino emission from Messier 77, also known as NGC 1068, an active galaxy in the constellation of Cetus. 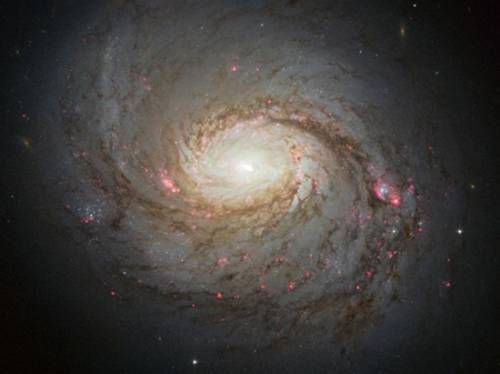 For the first time, an international team including Penn State scientists has found evidence of high-energy neutrino emission from Messier 77, also known as NGC 1068, an active galaxy in the constellation of Cetus.

Neutrinos are fundamental particles with no charge and almost no mass, and they rarely interact with other matter. High-energy neutrinos — like those detected here with energies in the teraelectron volt (TeV), or trillion-electron volt, range — can travel for billions of light-years through space without being deflected or absorbed. Thus, while they are extremely difficult to detect, they can provide accurate information about the distant universe, especially when the information the carry can be combined with information from other cosmic signals in what is called “multimessenger” astronomy.

The detection was made by the IceCube Neutrino Observatory, a massive neutrino telescope encompassing one billion tons of instrumented ice at depths from 1.5 to 2.5 kilometers below Antarctica's surface near the South Pole.

"IceCube is a veritable discovery machine,” said Doug Cowen, professor of physics and of astronomy and astrophysics at Penn State and a long-time IceCube collaborator. “The huge detector has lived up to its promise to launch the brand-new field of high energy neutrino astronomy, and then some, now by giving us glimpses behind a black hole's black-out curtain of matter. IceCube has once again proved that when humanity points a new instrument at the heavens — starting with Galilleo's first telescope — our knowledge of the universe around us increases by leaps and bounds."

This unique telescope, which explores the farthest reaches of our universe using weakly interacting neutrinos instead of light, recorded the first observation of a potential source of high-energy astrophysical neutrinos in 2017. The source of these first observations is the known blazar TXS 0506+056, which is situated in the night sky just off the left shoulder of the constellation Orion and about 4 billion light-years from Earth.

Blazars are very luminous and distant active galaxies with a powerful, relativistic jet of particles pointing directly at us. Unlike NGC 1068, the blazar TXS 0506+056 had not been studied much before the multimessenger detection of neutrinos and high-energy electromagnetic radiation that allowed follow-up measurements by almost 20 telescopes around the world. Now, the observation of neutrino emission from a different type of active galaxy brings us closer to understanding the supermassive black holes powering them.

“One neutrino can single out a source. But only an observation with multiple neutrinos will reveal the obscured core of the most energetic cosmic objects,” said Francis Halzen, a professor of physics at the University of Wisconsin–Madison, the headquarters of the National Science Foundation (NSF)´s Antarctic neutrino facility, and principal investigator of IceCube. “IceCube has accumulated some 80 neutrinos of TeV energy from NGC 1068, which are not yet enough to answer all our questions, but they definitely are the next big step towards the realization of neutrino astronomy.”

The results appear Nov. 4 in the journal Science.

Unlike light, neutrinos can escape in large numbers from extremely turbulent environments in the universe and reach Earth undisturbed by matter and the electromagnetic fields that permeate extragalactic space. And although scientists envisioned neutrino astronomy more than 60 years ago, the weak interaction of neutrinos with matter and radiation makes their detection extremely difficult. It took nine years, from IceCube’s completion in 2011 to May 2020, for the world's largest neutrino detector to record the nearly 80 events that provide evidence for neutrino emission from this nearby active galaxy. Each neutrino was registered after its interaction with an atomic nucleus in the ice near or inside IceCube.

As is the case with our home galaxy, NGC 1068 is a barred spiral galaxy, with loosely wound arms and a relatively small central bulge. However, unlike our own Milky Way galaxy, NGC 1068 is an active galaxy where most of its radiation is not produced by stars. Instead, the core of the galaxy shines across the entire electromagnetic spectrum due to material falling into a black hole about 15 million times more massive than our sun and four times more massive than the inactive black hole in the center of our galaxy.

This is not exactly the case for NGC 1068, which is what scientists call a Seyfert II galaxy. The name signifies that the view from Earth is not head-on but at an angle that obscures the central region of the galaxy where the black hole is located. In a Seyfert II galaxy, a torus of nuclear dust obscures most of the high-energy radiation produced by the dense mass of gas and particles that slowly spiral inward towards the center of the galaxy. This inflow, known as the accretion disk, produces a continuous growth in the mass of the central black hole.

Unlike with TXS 0506+056, multimessenger observations are expected to be more of a challenge in Seyfert II galaxies. The latest modeling of the black hole environments in these objects suggests that gas and dust should block the gamma rays and X-rays that would otherwise accompany the neutrinos. Thus, the astronomical community is excited about the low level of gamma radiation from NGC 1068, as it confirms the strong absorption of electromagnetic radiation in the region around the central black hole. With this neutrino detection, the core of NGC 1068, obscured for centuries, may provide a comprehensive understanding of the environments around supermassive black holes in the not too distant future.

“We are finally going beyond all the clouds,” said Elisa Resconi, a professor of physics at the Technical University of Munich, in Germany, who led the analysis team. “I think NGC 1068 could become a standard candle for future neutrino telescopes. It already is a very well-studied object for astronomers, and neutrinos will allow us to see this galaxy in a totally different way. A new view will certainly bring new insights.”

Now efforts focus in two directions: Achieving a joint observation of the highest energy sources in our cosmos in the new field of multimessenger astronomy and gaining a better understanding of what neutrinos tell us about the environments where they are produced.

“The observation of NGC 1068 is particularly fascinating, as it points to other potential neutrino sources being opaque to high-energy gamma rays,” explains Ignacio Taboada, a physics professor at the Georgia Institute of Technology and the spokesperson of the IceCube Collaboration.

IceCube continues to accumulate more neutrinos every year, providing a unique contribution to multimessenger studies of the universe. Future improvements can be applied to both new and old data to better understand emission from NGC 1068. IceCube collaborators are also developing an enlarged and improved neutrino observatory, hoping to speed the collection of high energy neutrino events for further study.

As often happens, new findings raise additional questions that are more difficult to answer. Are there other types of neutrino sources? Why have we not found other sources yet? How exactly were the neutrinos whose interactions were recorded by IceCube produced? Could they reveal the nature of dark matter, which we believe is responsible for 80% to 90% of all matter in the universe? And could they also explain how this galaxy and many others are held together?

Even more interesting, according to the researchers, is that these results also imply that there must be many more similar objects yet to be identified. With the neutrino measurements of TXS 0506+056 and NGC 1068, IceCube is one step closer to answering the century-old question of the origin of cosmic rays. The unveiling of the obscure universe has just started, and neutrinos are set to lead a new era of discovery in astronomy.

"Answering these far-reaching questions about the universe that we live in is a primary focus of the U.S. National Science Foundation," said Denise Caldwell, director of NSF's Physics Division. "Several years ago, NSF initiated an ambitious project to expand our understanding of the universe by combining established capabilities in optical and radio astronomy with new abilities to detect and measure phenomena like neutrinos and gravitational waves. The IceCube Neutrino Observatory’s identification of a neighboring galaxy as a cosmic source of neutrinos is just the beginning of this new and exciting field that promises insights into the undiscovered power of massive black holes and other fundamental properties of the universe."