There’s more than one level of torpor: shallow and deep, plus the transition stage between levels of torpor and the normal sleep state. 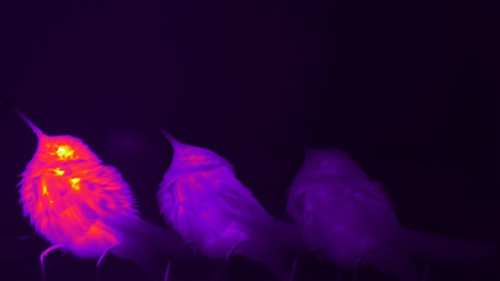 At night, hummingbirds lower their body temperature and metabolism drastically by dropping into an energy-saving state of inactivity called torpor. Scientists from multiple universities now find there’s more than one level of torpor: shallow and deep, plus the transition stage between levels of torpor and the normal sleep state.

Their study, “A Heterothermic Spectrum in Hummingbirds,” published Jan. 27 in the Journal of Experimental Biology.

“There have been a few hints that this ability to fine-tune thermoregulation was possible,” said lead author Anusha Shankar, currently a Rose Postdoctoral Fellow at the Cornell Lab of Ornithology. “But the studies were done under laboratory conditions, not the conditions a bird would encounter in the wild. It was really exciting to see that hummingbird torpor could be variable and flexible.”

Shankar and colleagues from Stony Brook University, the Swiss Federal Research Institute and George Fox University used infrared thermal imaging to track the body temperatures of three hummingbird species in Arizona: blue-throated mountain-gem, Rivoli’s hummingbird, and black-chinned hummingbird. They measured the temperature emitted from the skin around the eyes of the birds and found stark differences in heat generation at various stages.

Shallow torpor may have developed to balance energy saving with the costs of deep torpor. In deep torpor a hummingbird is probably more vulnerable to disease because its immune system shuts down; it’s also vulnerable to predation and sleep deprivation. This ability to use torpor at varying depths indicates that at least some birds are capable of fine-tuning how cold they get in torpor, and how they manage saving energy with the potential costs of dropping way down into deep torpor.

Torpor is not the same as sleep. Sleep uses much more energy and serves many restorative functions. Daily torpor also differs from hibernation. Hibernating animals enter a low-energy state for weeks or months at time while hummingbirds can enter torpor every night.

Many questions remain about what is taking place in the brain during torpor, how levels of body fat may trigger torpor, and how the hummingbirds can generate the heat to warm up again – a process that can take up to 30 minutes.

“At least 42 bird species use torpor,” said Shankar, “but only hummingbirds, nightjars and one species of mousebird go into deep torpor. Studying the range of torpor could help us understand the evolution of thermoregulation in birds.”