How social dynamics influence the gut microbes of wild lemurs 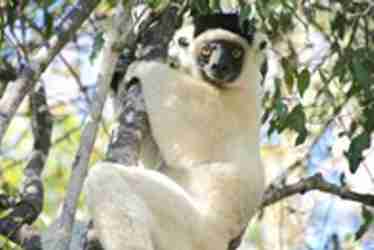 Humans aren’t the only species whose social behaviors can impact their health. New research from The University of Texas at Austin shows that Verreaux’s sifaka, a species of wild lemur native to Madagascar, have gut microbes that are affected by those they socialize with.

The findings show humans that we are not alone in being microbially affected by whom we spend time with and where we live. The study has important implications for the health of the lemurs studied and lemur conservation as a whole. Although social interactions can expose individuals to pathogens, they can also help with maintaining a diverse and healthy microbiome and adapting to new environments.

“Understanding the microbial communities associated with humans is central to understanding our development, immune function, metabolism and even our mood. As the pandemic has made very clear, microbes can be shared through social contact,” said study co-author Rebecca Lewis, an anthropology professor at UT Austin. “Our team has been studying this phenomenon by examining the social networks and microbial communities in wild lemurs. Primates get their gut microbes from other individuals of their species through direct social contact and shared environmental exposures.”

The longstanding nature of Lewis’ work on sifaka lemurs made it possible to study the primates’ social networks and microbial communities over multiple years. Researchers were able to track 58 lemurs from six social groups over the span of 5 years, making the study one of the first long-term examinations of the gut microbiomes of primates.

The study investigated the effects that three aspects of socialization – social groupings, interactions and individual dispersal between groups – had on the animals’ gut biomes, both individually and within each group. Over the course of three dry seasons, the six social groups maintained distinct gut microbial signatures, with the gut biomes of individual subjects changing in tandem among lemurs residing in the same group.

“Samples collected from group members during each season were more similar than samples collected from single individuals across different years,” Lewis said. “In other words, individuals in a group change through time together. In addition, new immigrants and individuals with less stable social ties exhibited less change in their microbiome over time. Our results suggest that when individuals in a population break into smaller groups with strong social connections, this shapes the changing composition of gut microbial communities and thus may be important drivers of health and resilience in wild primate populations.”

A healthy gut microbiome is central to the sifakas’ survival as folivores, which feed mainly on leaves. They rely on their gut microbiota to help them digest their food, and those without the right microbes are in danger of starvation. Fewer lemurs to interact with socially could lead to an impoverished gut microbiome, which in turn could decrease the likelihood of individuals’ long-term survival, whether they are in captivity or in degrading natural habitats.

The study’s first author is Amanda Perofsky, who recently earned a Ph.D. from UT Austin’s College of Natural Sciences. Perofsky worked closely on her dissertation with Lewis, who has been studying the behavioral ecology of wild lemurs in Madagascar since 2006. Additional authors are anthropology professor Anthony Di Fiore; Laura Abondano, who recently earned a Ph.D. in anthropology; and professor of integrative biology Lauren Ancel Meyers, all of UT Austin.