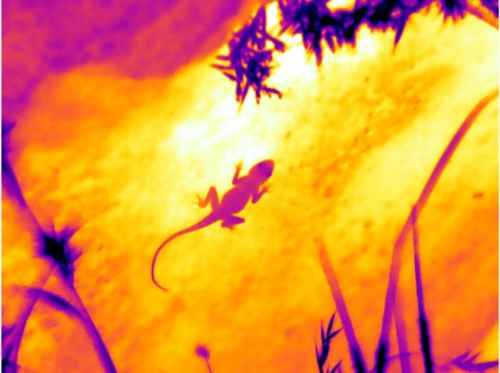 Sleep is fundamental for all animals; when an animal sleeps, the brain sorts and categorises memories, and restores its energy. Urban habitats like cities, however, can hamper an animal’s sleep quality and patterns due to higher temperatures, the presence of artificial structures like walls and buildings built by humans, and artificial light at night.

To adapt to these unusual conditions, urban peninsular rock agamas choose sleep sites that resemble their rural counterparts in the type of surface and the amount of light and heat received, a recent study by researchers at the Centre for Ecological Sciences (CES) at the Indian Institute of Science (IISc) has found. This study was published in Behavioral Ecology and Sociobiology.

While scientists have a reasonably good understanding of how animal brains work during sleep, how they sleep in the real world is not well known, says Maria Thaker, Associate Professor at CES and senior author of the study. “We know from human literature that certain conditions allow us to sleep better than others, and some disrupt our sleep. But animals live in the real world with all these conditions … and we wanted to understand where and how they sleep in the wild.”

The researchers compared lizard sleep sites in urban and rural habitats to look for differences in the types of surfaces the lizards were sleeping on, the extent of cover, temperature, and amount of light received.

“In the rural areas that are undisturbed, we scanned all the rocks, boulders, the ground, and shrubs to look for sleeping lizards. But in [urban] Bangalore, we would go into people’s backyards, because these lizards occupy empty lots or undeveloped plots, where there would be some concrete blocks that they use,” says Nitya Mohanty, first author of the study. Poking around in neighbourhoods at night with headlights and fancy camera equipment often drew a lot of attention from people and the police, and the team had to explain what they were doing to the public on several occasions, he adds.

Since urban habitats pose differences in terms of structure and more illumination at night as compared to rural areas, lizards would have to cope somehow, points out Thaker. “One way is to just sleep under these conditions. Or they can cope in another way, by finding conditions that closely match the wild as much as possible. What we found is somewhere in between the two.”

The team found that the lizards tend to pick structures that mimicked those in their natural habitat – they were more likely to sleep in rough concrete blocks that resembled their rocky sleep sites in the wild. The temperatures of both urban and rural sleep sites were also found to be similar. Urban sleep sites, however, were nine times more likely to be sheltered and covered as compared to rural sites, and this helped address the light problem in urban areas. This indicates that the lizards try to mitigate urban stressors by being flexible in their sleep site choices, and end up picking sites that resemble their rural sites.

Studying animals coping with anthropogenic environments is very important, according to Thaker. “The world is changing, and it is going to continue to change. So, if we know what it is that [other organisms] require to live here, then we can make some choices of our own to help keep them here.”