How humans evolved to get along (to extent that we do) 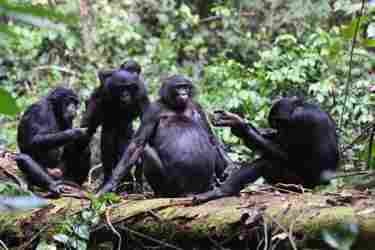 Shared grooming among bonobos is indicative of their group dynamics, which includes tolerance and cooperation. Courtesy of Martin Surbeck

Humans display a capacity for tolerance and cooperation among social groups that is rare in the animal kingdom, our long history of war and political strife notwithstanding. But how did we get that way?

Scientists believe bonobos might serve as an evolutionary model. The endangered primates share 99 percent of their DNA with humans and have a reputation for generally being peace-loving and sexually active — researchers jokingly refer to them “hippie apes.” And interactions between their social groups are thought to be much less hostile than among their more violent cousins, the chimpanzees.

Some, however, have challenged this because of a lack of detailed data on how these groups work and how they separate themselves. A new study led by Harvard primatologists Liran Samuni and Martin Surbeck on the social structure of bonobos may begin to fill in some of the blanks.

The research, published in PNAS, shows that four neighboring groups of bonobos they studied at the Kokolopori Bonobo Reserve in the Democratic Republic of Congo maintained exclusive and stable social and spatial borders between them, showing they are indeed part of distinct social groups that interact regularly and peacefully with each other.

“It was a very necessary first step,” said Samuni, a postdoctoral fellow in Harvard’s Pan Lab and the paper’s lead author. “Now that we know that despite the fact that they spend so much time together, [neighboring] bonobo populations still have these distinct groups, we can really examine the bonobo model as something that is potentially the building block or the state upon which us humans evolved our way of more complex, multilevel societies and cooperation that extends beyond borders.”

The study is a result of three consecutive years of observing the bonobo community in the Kokolopori reserve from 2017 to 2019. Previous research showed evidence of the 59 bonobos forming four separate groups that routinely crossed paths to interact, groom each other, and share meals. What hasn’t been clear is the extent to which the behavior of these bonobo groups resembles that of chimpanzee subgroups that form within one larger community.

Primatologists refer to chimp subgroups, which are highly territorial and hostile to those in different communities, as neighborhoods. Essentially, members of these subgroups don’t spend all their time together as part of one large group but are all still part of it, maintaining relationships with each other and (most importantly) not battling each other when they meet.

Bonobos have been far less studied than chimps due to political instability and logistical challenges to setting up research sites in the forests of the Democratic Republic of Congo, the only place where the primates are found. In addition, studying relationships among and between Bonobo groups has been further complicated by the fact that subgroups appear to intermingle with some frequency.

“There aren’t really behavioral indications that allow us to distinguish this is group A, this is group B when they meet,” Samuni said. “They behave the same way they behave with their own group members. People are basically asking us, how do we know these are two different groups? Maybe instead of those being two different groups, these groups are just one very large group made up of individuals that just don’t spend all their time together [as we see with chimpanzee neighborhoods].”

To get at the answer, at least two observers from the reserve followed each bonobo group daily from dawn to dusk, recording behavioral and location data that was then analyzed.

The researchers primarily tracked how much time individual bonobos spent together, with whom, and what activities they engaged in. This helped the researchers perform a statistical method called a cluster analysis. This method groups data points in a cluster so that points from the same group are clustered closely on a plot, while data points not in the same group are clustered in another space.

Essentially, they tracked which bonobos shared significant associations with one another, which ones tended to come together for meals more often, which ones tended to stick together when faced with a choice of whom to go with, and which ones interacted more in the same home range. This helped them draw clear distinctions between what bonobos were part of the same group and when members of one group were peacefully interacting with neighboring groups across each other’s borders.

They compared this to data collected on 104 chimpanzees that lived in the Ngogo community in Uganda’s Kibale National Park between 2011 and 2013.

The researchers found the bonobo clusters were overall more consistent and stable than the subgroups of chimps. This suggests that the bonobos within each cluster had a stronger social preference for one another than was seen within chimpanzee subgroups.

When it comes to the Kokolopori bonobos, this helped the researchers not only confirm the four groups — which they named the Ekalakala, the Kokoalongo, the Fekako, and the Bekako — but also come up with a reliable way to predict which bonobos were most likely to stick together when the different groups of bonobos met and separated.

Samuni and Surbeck, an assistant professor in the Department of Human Evolutionary Biology and the paper’s senior author, say the results show that bonobos, like humans, are capable of complicated relationships outside their immediate core network.

Now that the researchers have firmly established that these bonobos have distinct groups, they want to dig further into what cooperation and trade look between these groups and whether it can potentially represent what it looked like in our common ancestor. This would help explain how humans, to an extent, overcame antagonism between different groups and developed peaceful cooperation.

Surbeck, who founded and directs the Kokolopori Bonobo Research Project, points out the window to gain these powerful insights is closing as bonobos near extinction.

“There are very few left,” he said. “We gather here information that potentially will not be available anymore in 50 years if things continue the way they do.”